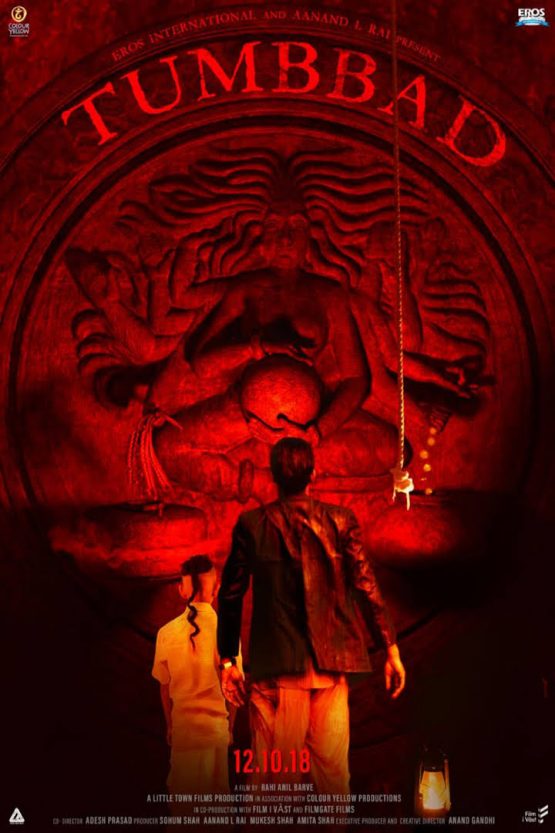 When a family builds a shrine for Hastar, a monster who is never to be worshipped, and attempts to get their hands on his cursed wealth, they face catastrophic consequences.

Tumbbad is a 2018 Indian Hindi-language period horror film directed by Rahi Anil Barve. Additionally, Anand Gandhi served as the creative director, and Adesh Prasad served as the co-director. Written by Mitesh Shah, Prasad, Barve, and Gandhi, the film was produced by Sohum Shah, Aanand L. Rai, Mukesh Shah and Amita Shah. Starring Sohum Shah in the lead role as Vinayak Rao, it follows the story of his search for a hidden treasure in the 20th century British India village of Tumbbad, Maharashtra.

Barve began writing the script based on a story a friend had told him about in 1993, by Marathi writer Narayan Dharap. He wrote the first draft in 1997, when he was 18 years old. From 2009 to 2010, he created a 700-page storyboard for the film. It was optioned by seven production companies who backed out and went on the floor (went into production) three times. It was first shot in 2012 but after editing, Barve and Shah were not satisfied. The film was then re-written and re-shot with filming completed in May 2015. Pankaj Kumar served as the director of photography while Sanyukta Kaza was its editor. Jesper Kyd composed the original score while Ajay-Atul composed one song.

In 1947, Vinayak Rao tells his 14-year-old son Pandurang about the Goddess of Prosperity. She is the symbol of unlimited gold (wealth) and grains (food) and the earth is her womb. When the universe was created she gave birth to 160 million gods. Hastar, her first and most beloved offspring, was greedy for all her gold and food. Hastar managed to acquire the gold from the goddess but the other gods attacked him just as he was about to acquire her food, but the goddess saved him on the condition that he could never be worshipped and would be forgotten by history. For years, Hastar has been sleeping inside his mother’s womb.

In 1918 in Tumbbad, Maharashtra, Vinayak’s mother serves the local lord, Sarkar, in his mansion. This includes offering him sexual services in the hopes to acquire a single gold coin kept with his Hastar statue. Meanwhile, at their home, Vinayak and his younger brother Sadashiv worry about having to feed the monstrous old woman, Sarkar’s great grandmother, chained up in a separate room. Sarkar later dies and the mother proposes leaving Tumbbad for Pune. Vinayak insists on finding the treasure that is rumoured to be hidden somewhere in the mansion. Sadashiv gets badly hurt after falling from a tree, forcing his mother to take him for help. She tells Vinayak he will have to feed his grandmother that night. She also warns him that if the old woman wakes up, he should say the name “Hastar” to make her sleep. Meanwhile, Sadashiv dies on the way to the doctor.

The mother directs her carriage driver to Sarkar’s mansion where she retrieves the gold coin. As Vinayak tries to feed her, the monstrous and hungry old woman attacks and shackles him to eat him who eventually remembers Hastar’s name and uses it to make her fall asleep. His mother returns, and the next day she and Vinayak leave Tumbbad for Pune. She forces Vinayak to promise never return to Tumbbad, despite his protests to stay and search for the treasure.

14 years pass, and Vinayak grows up. Desperate to escape his life of poverty, Vinayak returns to Tumbbad. The old woman, with now a tree growing out of her body, warns him he will be cursed to become immortal and turned into a monster like her if he touches the treasure i.e. Hastar. She explains that a well leads to the goddess’ womb where Hastar dwells, in exchange for ending her prolonged suffering. Vinayak keeps his promise and sets her on fire, thus killing her. Although Hastar stole the goddess’s gold, he was unable to acquire her grain. Therefore, being hungry for years, he desires flour. Vinayak physically trains himself to climb up and down a long rope and makes dolls out of dough to lure Hastar inside the goddess’s womb. While he is distracted by the food, Vinayak swipes at Hastar’s loincloth containing the gold. Vinayak regularly repeats the procedure to steal dropped coins. He offers his first gold coin to the opium merchant Raghav to pay off a debt. Each time he needs more money, Vinayak returns to Tumbbad to steal from Hastar.

Raghav openly wonders about the treasure rumoured to exist in the Tumbbad mansion while also questioning why Vinayak can only retrieve a few coins at a time. Vinayak and his wife give birth to their son Pandurang. When Sergeant Cooper gives him only two days to come through with the money, Raghav sells his widowed daughter-in-law to Vinayak as a mistress. Vinayak follows Raghav to the Tumbbad mansion and tricks him into descending into Hastar’s well. Hastar viciously attacks Raghav, turning him into a monster and mutating him into the walls of the womb. Vinayak burns Raghav alive to end his suffering. Vinayak takes Pandurang to the mansion to train him for the same purpose and is told not to bring the dough doll down. But he secretly brings a dough doll and Hastar unexpectedly attacks. They barely manage to escape and Vinayak chides his son for nearly getting them touched. Pandurang suggests stealing Hastar’s loincloth and they make dozens of dough dolls to distract Hastar. However, the two of them become trapped inside the womb when separate Hastars appear for each one of those dolls. With no hope of escaping, Vinayak ties the dolls to his body to act as bait. Once the coast is clear, Pandurang climbs back to the surface to see his father being mutated into a monster outside the well. Vinayak presents him with the stolen loincloth that he stole from Hastar, but Pandurang refuses to take it. Sobbing at seeing what his father turned into, Pandurang reluctantly sets Vinayak on fire and leaves.

Be the first to review “Tumbbad Dvd” Cancel reply