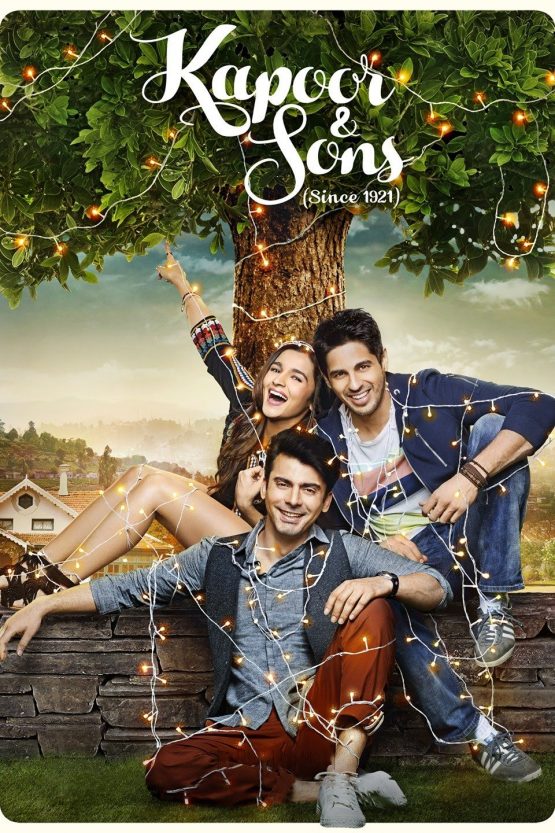 Brothers Arjun and Rahul return home to visit their ailing grandfather. Amidst numerous ongoing family problems, emotions get intensified when a girl causes a rift between the two.

Kapoor & Sons, also known as Kapoor & Sons (Since 1921), is an Indian Hindi-language drama film directed by Shakun Batra and produced by Karan Johar, Hiroo Yash Johar, and Apoorva Mehta under the banners of Dharma Productions and Fox Star Studios. The film stars an ensemble cast featuring Rishi Kapoor, Ratna Pathak Shah, Rajat Kapoor, Fawad Khan, Sidharth Malhotra and Alia Bhatt.Kapoor & Sons tells the story of two estranged brothers who return to their dysfunctional family after their grandfather suffers a cardiac arrest. The film was released worldwide on 18 March 2016 and received positive reviews mainly for its direction and performances, especially of Rishi Kapoor, Ratna Pathak Shah and Fawad Khan. Made on a budget of ₹35 crore (US$5.2 million), the film earned over ₹152 crore (US$23 million) worldwide. At the 62nd Filmfare Awards, Kapoor & Sons won five awards, including Best Supporting Actor for Rishi Kapoor, Best Story, and Best Screenplay. It was also nominated for Best Film.

Estranged brothers Rahul (Fawad Khan) and Arjun (Sidharth Malhotra) are compelled to return to their childhood home in Coonoor when their 90-year-old grandfather Amarjeet (Rishi Kapoor) suffers a heart attack. Rahul is a successful writer who appears to be the most mature in the family. Meanwhile, Arjun struggles to get his books published, resorting to working part-time as a bartender to make ends meet, while writing in his spare time. Their parents, Harsh (Rajat Kapoor) and Sunita Kapoor (Ratna Pathak Shah) favour Rahul for being successful, which upsets Arjun. While the brothers struggle to get along, their parents grapple with their troubled marriage. Harsh is discouraging of Sunita’s wish to open a catering business and Harsh’s past extra-marital affair is a sore spot in their relationship. Amarjeet reveals that his last wish is to take a family photo titled “Kapoor & Sons, since 1921”.

At a party, Arjun meets Tia Malik (Alia Bhatt), and the two hit it off. Rahul and Tia also meet, and the two go out for dinner. However, Rahul is shocked when she spontaneously kisses him. Tia reveals to Arjun that she lost her parents at the age of thirteen and lives alone. Arjun too reveals that Rahul’s bestselling novel’s idea was similar to his but he never confronted his brother so as to not break the family apart. Tia tells her friend that she loves Arjun but regrets involving herself with Rahul.

The Kapoor family throws a party to celebrate Amarjeet’s birthday. Arjun discovers that Tia and Rahul know each other and fears that Rahul and Tia have something between them, but Rahul clarifies that he is already in a committed relationship in London. Problems arise when the family finds out that Harsh invited Anu, the woman he had an affair with. A family argument ensues, ending the party. Harsh and Sunita later reminisce on how happy they were. Harsh apologizes for losing all their money.

The Kapoor family tries to fulfill Amarjeet’s wish to take a family photo but are unsuccessful when secrets are revealed. Rahul finds out that his father was lying about having ended the affair, while Sunita discovers that the relationship Rahul has in London is actually with another man. Tia tells Arjun what happened between her and Rahul, calling it a mistake. Arjun finds out Rahul has been reading his manuscript and confronts him about stealing his first story. A shaken Sunita then reveals to Arjun that she was the one who gave Rahul his story, thinking Arjun had no interest in writing. Amidst all this, Harsh dies in a car accident. Rahul comes out as gay to Arjun and the two leave for London, England and Newark, New Jersey, United States respectively.

After four months, the duo receive a video message from Amarjeet, in which he requests them to come back, as he is feeling alone. Sunita comes to terms with Rahul’s homosexuality, the misunderstanding between Arjun and Tia is cleared and they get back together. The family finally takes the family photo Amarjeet wanted, where they place a cutout of Harsh in his memory.

Be the first to review “Kapoor & Sons Dvd” Cancel reply