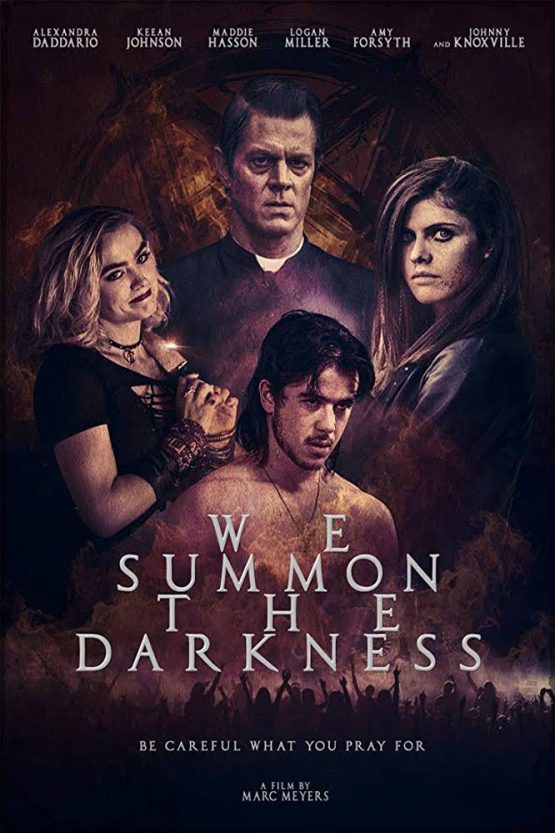 We Summon the Darkness Dvd

Three best friends cross paths with sadistic killers after they travel to a secluded country home to party.

The film premiered at Mammoth Film Festival on February 28, 2019, and was released in digital and on-demand in the United States on April 10, 2020, by Saban Films.

In Indiana, July 1988, Alexis Butler and her two friends Val and Bev are driving to a heavy metal show, when a milkshake is thrown from a blue van onto their windshield. Once they arrive at the concert, they find the same blue van, and Val throws a small firecracker into it, causing the three boys inside to climb out. Ivan owns the van and his buddies Kovacs and Mark, who is said to be leaving for Los Angeles soon, are interested in the girls. After the show, Alexis invites the boys to her father’s empty mansion. Bev and Mark seem to like each other, yet Bev seems to almost avoid him. As they play a game of Never Have I Ever, the girls drug the boys’ drinks and reveal they are going to murder them and make it look like a Satanic cult killing.

The Daughters of the Dawn, the church the girls are a part of, has murdered eighteen other people in the same way in order to create fear and send more people to their religion. Alexis is shown to be the most insane and stabs Ivan after he criticizes her religious belief in Christ, and he bleeds to death. Mark and Kovacs briefly escape, hiding in a pantry. Susan, Alexis’s soon-to-be ex-stepmother, comes home to retrieve a passport and reveals she has called the police because she saw the strange blue van and the house lights on. Susan then discovers Ivan’s body and Alexis stabs her to death.

A police officer arrives and becomes suspicious, so Alexis runs from him and back into the house where he chases her, gun raised. The officer finds the injured Kovacs and Mark who pleads for help, but Val sneaks up on him, takes his gun, and shoots him, killing him. As Alexis and Val fight over the gun, Bev appears, threatening her friends with an electric outboard trolling motor. Val and Alexis tell Bev they are doing the Lord’s work, but Bev declares she will let Mark and Kovacs go.

Bev tries to help Mark and Kovacs, the latter who is bleeding out and will not last much longer unless he makes it to a hospital. Alexis has the car keys, so Mark goes after her to retrieve them. When Kovacs sees car lights, he goes outside struggling to walk to find John Henry Butler, Alexis’s father and the pastor of the Daughters of the Dawn. Mark obtains the keys, but Alexis attacks him and they fight. Val attacks Bev and tries to kill her, but Bev lights Val on fire (her hair being full of hairspray). Butler attacks Kovacs off-screen and he makes it back into the house where Bev finds him. Just before Kovacs dies, he tells Bev to save Mark.

Butler shoots Mark as he is strangling Alexis. He then berates his daughter for doing a terrible job murdering and covering it up. He tells Alexis they have to make some sacrifices to get out of the predicament she has caused and attempts to strangle her to death when Bev comes up and knocks him out. Alexis is over-the-top crazy and Bev throws her out of a window in a dramatic and exaggerated fashion. Mark is still alive, and he drives away with Bev, only to find Alexis standing in the road. Off-camera, Bev runs Alexis over.

Butler is still alive and makes himself into a victim, claiming that Alexis was led astray and joined a Satanic cult. Bev and Mark leave town together.