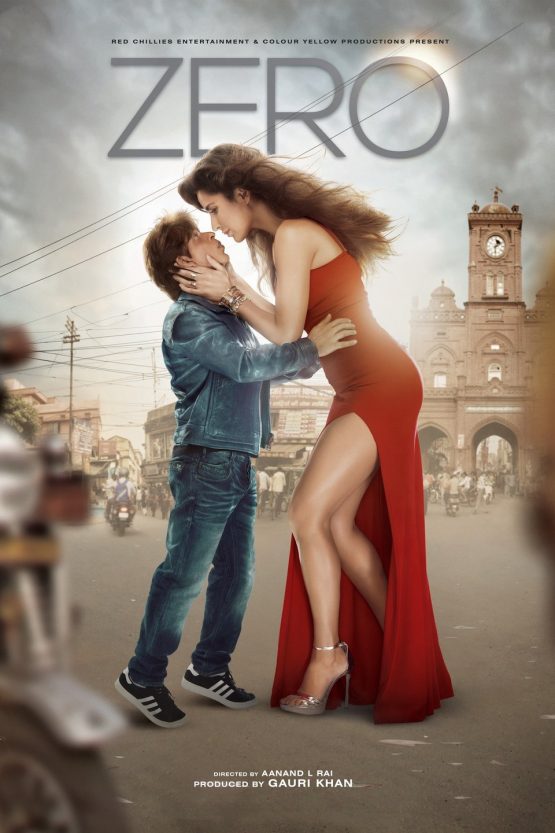 Bauua, a person of short stature, falls in love with Aafia, a scientist suffering from cerebral palsy, but soon breaks up with her. Later, what he learns of Aafia changes his life forever.

Zero is a 2018 Indian Hindi-language romantic comedy-drama film written by Himanshu Sharma and directed by Aanand L. Rai. It was jointly produced by Colour Yellow Productions and Red Chillies Entertainment’s Gauri Khan, and stars Shah Rukh Khan, Anushka Sharma, and Katrina Kaif. It follows Bauua Singh, a short man from Meerut who, after having difficulty finding a marriage partner, finds a companion in Aafia Bhinder, a NSAR (a fictional space research facility) scientist with cerebral palsy. However, film superstar Babita also gets close with him, testing his first relationship. This love triangle takes them to far-off cities, and thrusts Bauua into an adventure to discover both his true love and completeness in a life lived to the fullest.

Produced on an budget of ₹200 crore (US$28 million), Zero is Khan’s most expensive film. The film was conceived by Rai in 2012, before pre-production began in 2016. Initially having a working title of Katrina Meri Jaan, Zero went through numerous title changes before arriving at the final title in early 2018. Principal photography of the film began in Mumbai on May 2017. Filming concluded in 2018 in Orlando. The film’s soundtrack is composed by Ajay-Atul with lyrics written by Irshad Kamil, under the label T-Series.

Zero was released on 21 December 2018, to mixed reviews from critics. Critics particularly praised the film’s visual effects and the performances of Khan and Kaif, but the screenplay was criticised for its inconsistency.

Bauua Singh (Shah Rukh Khan) is a dwarf from Meerut who has trouble finding a marriage partner. After using matrimonial agencies with little luck, he eventually finds his companion in Aafia Yusufzai Bhinder (Anushka Sharma), a NSAR scientist (a fictionalized depiction of NASA) with cerebral palsy. In the events that followed, both fall in love with each other, but Bauua dumps her after five months. However, Aafia comes looking for him, and Bauua’s parents fix their marriage. On their marriage day, Bauua’s friend Guddu (Mohammed Zeeshan Ayyub) tells him that he is shortlisted for a dance competition where he had applied earlier, where the winner gets a chance to meet Babita Kumari (Katrina Kaif), a Bollywood actress. Bauua, determined to meet Babita, runs away from the marriage after a confrontation with Aafia, leaving everyone devastated.

Bauua wins and gets to meet Babita at a party, accompanied by other famous Bollywood actors. Babita offers him a job after he displays an ability to guess what goes on in people’s mind by observing them. He accompanies her on film schedules and award functions, helping her patch up with her ex-boyfriend Aditya Kapoor (Abhay Deol), who had previously cheated on her. Bauua tells Babita about Aafia, who in turn falsely tells him that her parents were dwarves and her father cheated on her mother, to make Bauua realise his mistake. He realizes his wrongdoings and wishing to reconcile with Aafia, starts an argument at a party organized by Babita, following which Babita throws him out and breaks all ties with Aditya, realizing the latter is cheating on her again.

Bauua and Guddu travel to New York, where Aafia is attending a seminar. Bauaa crashes the seminar to meet her, but Aafia refuses to see him. Aafia’s father tells him that Aafia was pregnant with Bauua’s child, due to which she wanted him to marry her in the first place. A heartbroken Bauua decides to leave the city, but decides to try his luck one more time. After meeting with Aafia again at NSAR and getting rejected by her, Bauua enlists in a program recruiting human volunteers to be sent to Mars on a rocket. After painstaking training and getting help from one of the applicants, Bauaa gets selected, while Guddu is rejected for his vision disability. On the day of his launch, Aafia, who is supposed to marry Srinivasan (Madhavan), a fellow scientist and Aafia’s colleague, leaves him, and she reaches NSAR seconds before Bauua’s launch. Bauua assures her that he always loved her, just before the rocket takes off. The launch is witnessed by Aafia, Guddu and Srinivasan, along with Babita and Bauua’s family via television broadcast. The launch is successful, and the rocket thrusts off in space.

In a voice-over by Aafia, it is revealed that Bauua eventually reaches Mars, and sends a video recording of himself from there. His rocket gets lost in space somewhere while returning, and Aafia waits for him. Fifteen years later, a Chinese space station receives the signal of Bauua’s escape pod, which crash lands in the Indian Ocean, revealing Bauua is still alive.

Be the first to review “Zero Dvd” Cancel reply