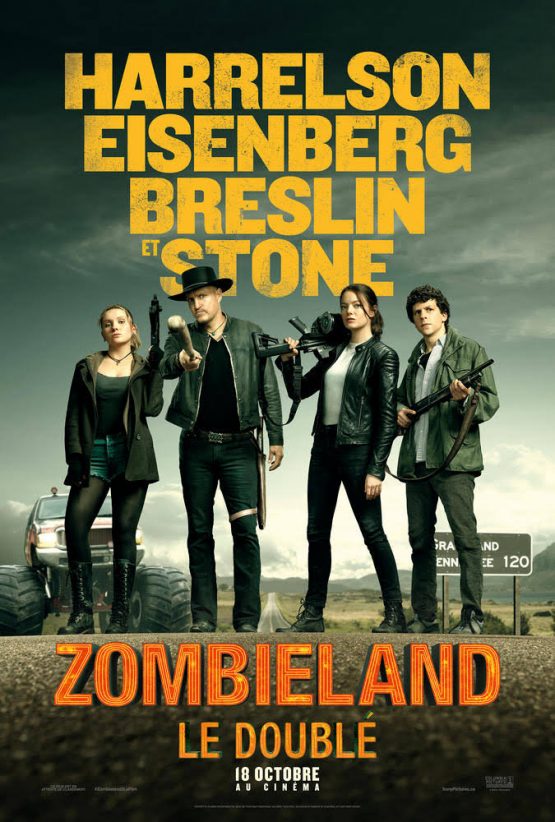 Ten years after their adventure at Zombieland, survivors Tallahassee, Columbus, Wichita and Little Rock embark on a mission to slay evolved zombies while struggling with their emotional battles.

Talk of a Zombieland sequel began before the release of the first installment, with Reese and Wernick suggesting ideas and the cast voicing their desire to make a second film. By 2017, a script had been written, the cast were on board, and the film was confirmed in July 2018 by Sony Pictures. The four main stars and Fleischer all signed on that month, while additional cast members, including Dawson and Wilson, joined in early 2019. Filming took place from January to March 2019.

Zombieland: Double Tap was released in the United States on October 18, 2019, by Sony Pictures Releasing under its Columbia Pictures label. It received mixed reviews from critics and has grossed $122 million worldwide.

Ten years after the events of the first film, survivors Tallahassee, Columbus, Wichita, and Little Rock have become experts in identifying and disposing of various zombies and set up their new home in the abandoned White House. Columbus decides to propose to Wichita using the Hope Diamond, while Tallahassee rebuffs Little Rock’s hopes of starting her own family. The next morning, Tallahassee finds a note from Wichita and Little Rock, who have left due to Little Rock feeling Tallahassee still treats her like a child and Wichita’s fear she is too attached to Columbus.

A month later, while exploring a mall, Columbus is startled by a ditzy blonde named Madison, who has survived Zombieland alone by hiding the majority of the time inside the freezer of a Pinkberry store. Madison quickly annoys Tallahassee, but Columbus invites her back to the White House, where the two have sex. Returning and discovering Columbus has slept with Madison, Wichita explains that Little Rock has left for Graceland with a pacifist from Berkeley, and informs the group of more agile and durable “super zombies.” Fearing for Little Rock’s safety, the group heads toward Graceland in a rundown minivan.

On the way they encounter one of the super-zombies that takes multiple gunshots to kill, leading Columbus to nickname it the “T-800” after the Terminator franchise. Madison shows signs of “zombification,” forcing Columbus to lead her into the forest to shoot her. The group arrives at Graceland, but finds it in ruins, which greatly upsets Tallahassee who is a great admirer of the King. However, they discover “the Beast,” Tallahassee’s modified presidential limousine which was stolen by Little Rock, at a nearby Elvis-themed motel. The place is run by Nevada, who reveals Little Rock took another vehicle toward Babylon, a hippie commune. Bonding over their love of Elvis, Nevada and Tallahassee spend the night together.

Heading out, the group finds Madison. She rejoins the group and explains that her nut allergy caused symptoms similar to zombification. Instead of shooting her, Columbus spared her in the forest. The group arrives at Babylon, give up their weapons, and find Little Rock. A satisfied Tallahassee departs, only to find a horde of super zombies attracted by the commune’s fireworks and drives back to warn everybody. Left without guns, Tallahassee devises a plan to kill the zombies with exploding biodiesel and then have commune members, armed with barricade shields, corral the stragglers off of a skyscraper with himself as the bait.

The zombie horde is more massive than expected and the group is surrounded and almost overwhelmed. Luckily, Nevada arrives in Albuquerque’s monster truck, rescuing the group, although the vehicle soon rolls over. Escaping upstairs, the survivors corral the zombies off the roof. Tallahassee uses a construction crane hook to dangle just out of reach, but the last two zombies seize his leg as they fall. Little Rock shoots them with a pistol given to her earlier by Tallahassee, rescuing him. The two reconcile and Wichita accepts Columbus’ proposal of marriage. Little Rock breaks up with Berkeley, who hooks up with Madison. The original quartet leave Babylon, joined by Nevada. Columbus remarks that they have finally found their home in each other.

In a mid-credits scene, Bill Murray witnesses the start of the zombie outbreak in 2009 while promoting the fictional Garfield 3: Flabby Tabby, before making his escape while killing multiple zombies. In a post-credits scene, Murray is shown in an outtake causing the others to break character while he coughs up a hairball in his interview.

Woody Harrelson as Tallahassee, Columbus’ trusted partner
Jesse Eisenberg as Columbus, who survives thanks to a strict set of rules
Emma Stone as Wichita, a hardened survivor who is reluctant to settle down with Columbus
Abigail Breslin as Little Rock, Wichita’s rebellious younger sister
Rosario Dawson as Nevada, owner of an Elvis-themed motel
Zoey Deutch as Madison, a dumb blonde
Luke Wilson as Albuquerque, Flagstaff’s partner whose personality mirrors Tallahassee
Avan Jogia as Berkeley, a pacifist, whom Little Rock picks up
Thomas Middleditch as Flagstaff, Albuquerque’s partner who has his own set of commandments for survival, and whose personality mirrors Columbus’
A mid-credits scene features Bill Murray being interviewed by Al Roker, Lili Estefan, Josh Alex Horowitz and Grace Randolph, in the final minutes before the Zombie apocalypse hits them.