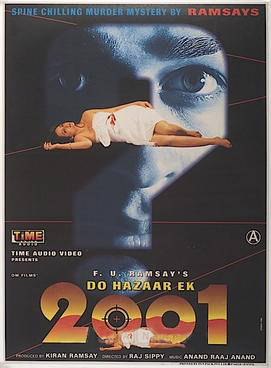 Police officers Anil and Rajat find themselves under suspicion as they investigate a gruesome murder. However, as the investigation deepens, the needle of suspicion points to the commissioner.

2001: Do Hazaar Ek is a Bollywood Mystery film. It was released in 1998 and stars Dimple Kapadia, Jackie Shroff, Rajat Bedi and Tabu.

Following the brutal slaying of a call-girl named Julie (Upasana Singh) in Mumbai, two police inspectors, namely Anil Kumar Sharma (Jackie Shroff) and Rajat Bedi (Rajat Bedi), are assigned to investigate and bring the culprit(s) to book. Anil & Rajat note that the killer leaves “2001” marked on the body of the victim. Anil comes to know that the man staying in Julie’s room is a prominent Member of State Parliament, Ramaswamy (Sadashiv Amrapurkar), and would like to list him as a suspect. Julie’s death is followed by more killings in the same style, and killed ones are Advocates Sarkari (Sharat Saxena) and Kajal (Navneet Nishan), and a man named Krishna Rao (Gulshan Grover). Then Ramaswamy himself is attacked, but survives and is hospitalized. When he regains consciousness for a brief period of time, he points an accusing finger at Rajat and then relapses. Not wanting to take any chance, Police Commissioner Malik (Mohan Joshi) has Rajat under house arrest. Then Anil comes across some evidence that links the killing to none other than Malik himself, while Rajat starts suspecting Anil and gathers evidence against Anil. The question remains: Is the killer one of these police officers? If so, which one, or are all three collectively involved in these gruesome deaths?

Be the first to review “2001: Do Hazaar Ek Dvd” Cancel reply