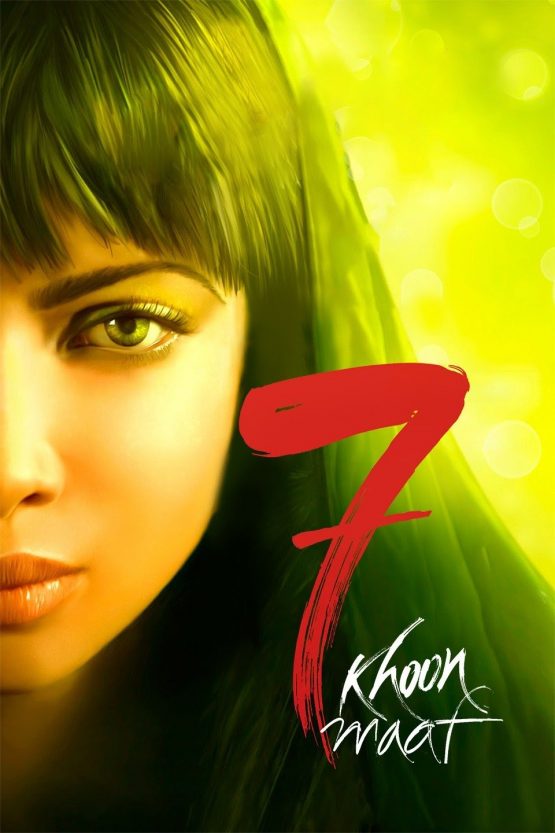 Susanna is hungry for love and will go to any extent to find it in its purest form. In her quest for the perfect man, she gets married a number of times as each of her husbands die mysteriously.

7 Khoon Maaf is an adaptation of the short story Susanna’s Seven Husbands by Ruskin Bond. After Bhardwaj saw the possibility of a script in the short story, he requested Bond to develop the story for a film adaptation. Bond expanded his four-page short story into an 80-page novella, and later Bhardwaj co-wrote the script with Matthew Robbins. The film’s musical score was composed by Bhardwaj, and Gulzar wrote the lyrics. Principal photography started in Kashmir before moving to Coorg, where extensive filming was done.

The film opened on 18 February 2011, to universal critical acclaim, with special praise for Chopra’s performance. Despite the universal critical acclaim, 7 Khoon Maaf underperformed at the box-office. However, according to its producers, it made a profit by earning a total of ₹33 crore (US$4.6 million) for its box-office run and television-music-home-video rights against a production budget of ₹15 crore (US$2.1 million). It premiered at the 61st Berlin International Film Festival, receiving several accolades at award ceremonies across India. At the 57th Filmfare Awards 7 Khoon Maaf received four nominations, winning two: the Best Actress Critics Award for Chopra and the Best Female Playback Singer for Uthup and Rekha Bhardwaj’s song, “Darling”.

Prologue—
7 Khoon Maaf tells the story of an Anglo-Indian woman, Susanna Anna-Marie Johannes (Priyanka Chopra), who murders all her husbands. Susanna tries to find love, but each time of the six of seven times, the husband’s flaws prove fatal. The story is narrated by forensic pathologist, Arun (Vivaan Shah), to his wife, Nandini (Konkona Sen Sharma). Arun has known Susanna, who was his rich benefactor, since his childhood, and had a secret crush on her.

Army Major
Susanna’s first husband, Edwin Rodriques (Neil Nitin Mukesh), is an army major, who is jealous, and possessive. Disabled, he suspects that the beautiful Susanna will be unfaithful and takes out his anger on her. Although Susanna tolerates Edwin’s cruelty, she cannot forgive him for blinding her faithful, mute stableboy (Shashi Malviya) with a whip. Edwin is eliminated during a panther- hunting trip with the help of her faithful maid (Usha Uthup), butler (Harish Khanna), and the stableboy.

Jimmy Singer
Susanna’s second husband, Jamshed Singh Rathod (John Abraham), who renames himself Jimmy Stetson after their marriage, is a singer whose flaw is his pride. Jimmy becomes successful and misuses his fame – stealing songs, dalliances with other women, and drugs. Susanna tries to wean him from his addiction, but when he continues in secret, he is disposed of with a heroin overdose. Police investigators find footprints near his body, indicating that a person with six toes (one of her faithful servants) is the murderer but Susanna uses her charm to deflect the suspicion.

Poet Khan
Susanna’s third husband, Wasiullah Khan (also known as Musafir) (Irrfan Khan), is a soft-spoken, thoughtful poet by day and a sado-masochist by night, the epitome of anger. Susanna tries to cover her bruises; her servants cannot bear to see her mistreated. Khan is ultimately interred in a snowy Kashmiri grave.

Nik the Spy
Her fourth husband, Nicolai Vronsky (Alexander Dyachenko), is a Russian spy leading a double life, who is enchanted by her. When Susanna discovers he has another wife and family back in Russia, he meets his end in the well housing her pet snakes.

Inspector Keemat
Her fifth husband, Keemat Lal (Annu Kapoor), is a police inspector who has shielded her from prosecution in exchange for sexual favors. His dependence on Viagra proves his undoing; one fateful night, Susanna mixes an overdose of the drug into Lal’s drink. At this point, Arun returns from Russia as a doctor. When Susanna tries seducing him, he leaves her.

Doctor Modhu
Modhusudhon Tarafdar (Naseeruddin Shah) is a Bengali doctor who rescues Susanna from a suicide attempt and puts her on a mushroom-only diet. Although she does not want to marry him, he persuades her with a promise that she will be the sole heir of his property. Actually bankrupt, he tries to poison her, in his greed for her inheritance. When her butler dies instead, Susanna shoots Tarafdar during a game of Russian roulette. She then sets the house ablaze in another suicide attempt. her maid dies in her attempt to rescue Susanna.

Epilogue — Seventh Husband
In the forensics laboratory, Arun discovers that the body is not Susanna’s but declares her dead to return her favor of educating him. He goes to Pondicherry, looking for Susanna, who has decided to become a nun, in effect making Jesus Christ- representation of love and kindness – her seventh husband.

Be the first to review “7 Khoon Maaf Dvd” Cancel reply