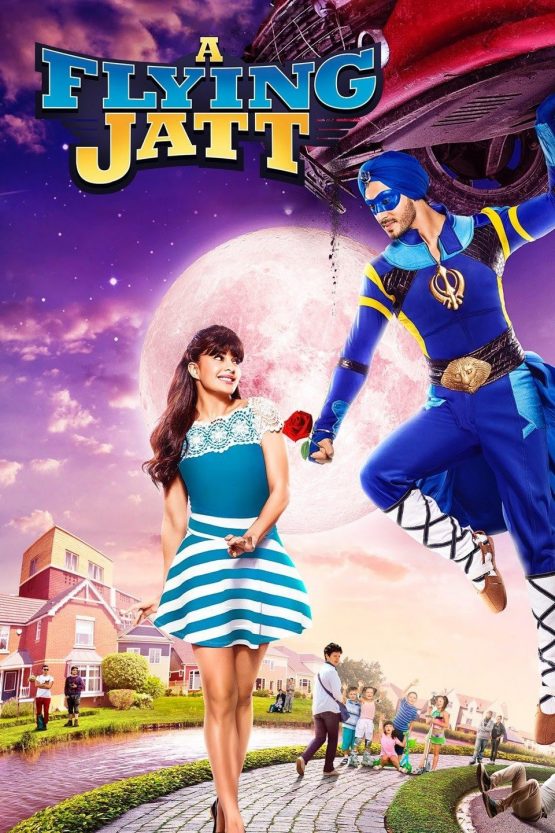 Aman, a martial arts teacher, discovers his superpowers when he engages in a fight with Raka, a mercenary. However, Raka is exposed to toxic waste and becomes more powerful and Aman must defeat him.

A Flying Jatt is a 2016 Indian Hindi-language superhero film co-written and directed by Remo D’Souza and produced under the banner of Balaji Motion Pictures. It features Tiger Shroff, Jacqueline Fernandez and Nathan Jones in the lead roles. A Flying Jatt narrates the story of an ordinary man (Shroff) who gains superpowers. The film released worldwide on 25 August 2016 on Janmashtami weekend.

Wealthy and influential businessman Mr. Rakesh Malhotra (Kay Kay Menon) has built a factory on the shore of a lake into which pollutants and toxic waste are released. He wants to build a bridge across it for faster transportation but cannot do so due to a sacred tree present on the other side of the lake on a piece of land which belongs to Mrs. Dhillon (Amrita Singh), a religious but irrepressible Punjabi woman living with her two sons Aman Dhillon (Tiger Shroff) and Rohit Dhillon (Gaurav Pandey). Aman is a martial arts teacher in a school, and has a crush on Kirti (Jacqueline Fernandez), a fellow teacher.

After Malhotra fails to intimidate the Dhillon family into selling their land, he brings in Raka (Nathan Jones), a mercenary, to get the job done. Raka arrives at the tree with a chainsaw but Aman is present there and tries to stop him. Raka beats Aman badly but moments before he tries to decapitate him with the chainsaw saw a lightning bolt hits the tree. The impact flings Raka away and he lands amongst barrels of toxic waste outside Malhotra’s factory.

The next morning, Aman finds himself in his bed alive with no sign of any injury and presumes all that happened to be a dream. He also does not notice a khanda that has appeared on his back, the same symbol which was carved on the tree and had been imprinted on him during the attack. Later that day, he and his brother notice a few unusual things happening to him, such as increased agility and the ability to absorb information by touching objects. After escaping an ambush using super speed, Rohit and his mother confirm that Aman has somehow gained super powers. She immediately declares him a superhero.

After making him a costume and showing him several superhero films for inspiration, Aman’s mother tells him the story of his father Sardar Kartar Singh Dhillon, a Sikh who went to Shaolin to learn martial arts and was named “Flying Jatt”. She asks Aman to take up the legacy of his father and keep Flying Jatt as his superhero name to which he agrees. Although his superhero exploits get off to a rocky start, Flying Jatt is soon recognised when he saves hostages from a terrorist attack at an airport. As he gains even more success being a hero, Aman proposes to Kirti and reveals his secret identity to her.

Raka is found alive but is now stronger and more dangerous than before after being exposed to the pollutants at the factory, which further exposure continues to make him even more powerful. Aman goes on to battle him several times, beating Raka each time before finally becoming gravely injured in a brutal fight. To save him from further pain, his brother Rohit goes in his place as Flying Jatt and gets killed. Not wanting to lose her remaining son, Mrs. Dhillon decides to leave. However, Aman decides to stay, saying that the cries and sounds of pain of the people would never leave him. Aman then prepares to fight Raka one last time.

However, believing Flying Jatt to be dead, the people decide to take on Raka on their own, with even Malhotra joining them after his daughter is affected by the increasing pollution. Raka returns to kill them once and for all, but Flying Jatt suddenly appears. Raka, in a fit of rage, drags Flying Jatt to the sacred tree and tries to kill him when his mother reappears before them and prays, giving more inspiration to Aman who gets up and takes Raka to an asteroid near Earth. Raka becomes vulnerable on the pollution-free asteroid, and after a long fight, Aman finally inserts his kara (steel bracelet) into Raka, causing him to explode.

Be the first to review “A Flying Jatt Dvd” Cancel reply