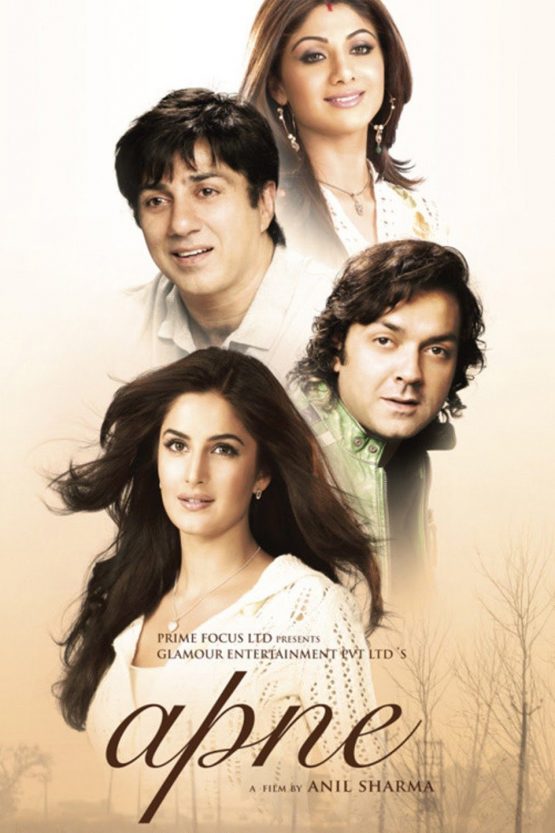 A wrecked boxer turns to his sons to win the glory that eluded him in the ring. But when his younger son is injured in the ring, the elder one decides to fulfil his father’s dream.

Apne (Ours) is a 2007 Indian Hindi sports drama film directed by Anil Sharma. It is the first film to feature Dharmendra and his real-life sons Sunny Deol and Bobby Deol together. Previously Sunny and Bobby had worked together in Dillagi (1999) and Dharmendra and Sunny had also appeared together in Sultanat (1986) and Kshatriya (1993). Kiron Kher, Shilpa Shetty and Katrina Kaif play the female leads. The film opened to an excellent response across India and emerged as a hit overseas as well.

Dharmendra plays the role of a disgraced ex-boxer Baldev Chaudhary who tries to wash a stain in his boxing career through his sons Angad and Karan (Sunny & Bobby Deol). Dharmendra had earlier played the role of a boxer in the film Main Intequam Loonga (1982). Footage from that film is used as flashback scenes in this film to show Baldev’s career as a boxer.

Former Olympic medallist boxer Baldev Choudhary (Dharmendra) is disgraced while competing for the World Heavy weight championship when a betting syndicate falsely accuses him of drug doping. He tries to erase this stain upon his honour by training up his son, Angad (Sunny Deol) but financial difficulties keep them from achieving his dream. He trains a local boy to get into a media hyped TV boxing show, but is dropped for a better coach at the last minute. Baldev’s younger son Karan (Bobby Deol) has just launched his first music album. Realising his father is depressed, he gives up his own dream of a musical career to become a boxer and please his father. Karan persists with training and wins a series of fights, thinking that victory will bring his family together. The final match is with the current world heavy champion; Karan is tricked and he ends up paralysed in a hospital bed. Baldev, who wanted to wash a stigma is now about to lose his son. When Karan reveals the world heavy champion cheated, Angad decides to return to boxing and win the title for his father. He eventually brings the world heavyweight champion belt to India in triumph, however meanwhile Karan suffers liver damage and requires a liver to survive. A guilt stricken Baldev pleads with the doctors to use his liver, but the doctors reject the idea. In a stroke of luck, a liver is given to Karan through an unknown donor. In the end, Baldev who was going to give up his life for Karan, is instead alive and happy with his family.

Be the first to review “Apne Dvd” Cancel reply