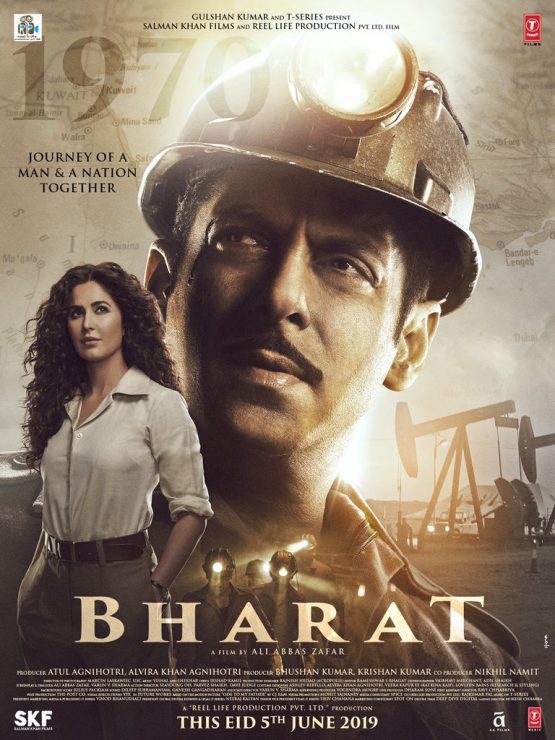 During the India-Pakistan partition, a family gets torn apart leaving Bharat, one of the children, in charge of the remaining members. All his life he tries to keep the promise he made to his father.

Based on the 2014 South Korean film Ode to My Father, principal photography for Bharat began in April 2018. Shooting took place at such locations as Abu Dhabi, Spain, Malta, Punjab and Delhi. Kaif joined the cast soon after Priyanka Chopra opted out of the role after filming commenced, for her impending engagement to Nick Jonas. Filming concluded in March 2019. The film’s score was composed by Julius Packiam and the songs were composed by Vishal-Shekhar, with lyrics written by Irshad Kamil, and released under the banner T-Series.

Bharat was theatrically released in India on 5 June 2019, on the occasion of Eid al-Fitr. It received mixed reviews from critics. The film earned ₹42.30 crore on its first day, becoming Khan’s biggest opening day release. It emerged as a commercial success with a worldwide gross of ₹325.58 crore (US$46 million).

Set in Delhi during 2010, the film begins when Bharat, a shopkeeper, refuses to part with his store despite lucrative offers. On his 70th birthday, he tells his past life to his grandniece and the film goes into flashback.

Partition of India in 1947: Bharat’s parents and siblings board a train to India with many refugees for safety from the terrible riots in Pakistan. Bharat loses his baby sister Gudiya in the chaos.

Bharat’s father Gautam stays behind to search for Gudiya. He has Bharat promise him to take care of the family and move to the imported goods store of Gautam’s sister Jamuna. As a child, Bharat supports his family.

Bharat joins The Great Russian Circus with his friend Vilayti, after meeting a roadside circus worker Radha as they fall in love. He spends a number of years there and attains fame.

Bharat leaves the circus when his brother Chote is hurt in an accident while trying to emulate him. He bids a tearful goodbye with Radha. Due to Nehru’s death, the country is devastated. Bharat and Vilayati look for various jobs.

Bharat joins Indian migration prompted by oil discovery in Saudi Arabia to earn money for his sister Mehek’s marriage. There he falls in love with his chief engineer Kumud.

Kumud asks Bharat for marriage, but he refuses being afraid that it comes in way of fulfilling Gautam’s promise. Back in India, Kumud arrives to announce her love for Bharat. They begin a live-in relationship.

Jamuna dies; Bharat is accepted for job of stationmaster. During 1983 Cricket World Cup, his uncle Keemat, in need of money, plans to sell the store, but Bharat disagrees and says that he and his aunt jamuna had worked hard in the store and does not want to sell the store. His uncle asks him to buy the store from him. As his dad promised him that he will come back to hind ration store and Bharat still has the hope that his father will come back.

Bharat leaves India again with Vilayati as sailor for a period of 8 months and earns enough money to buy the store, the time during which Vilayati also marries Susan, a foreigner.

After economic liberalisation in India and globalisation, Kumud becomes the creative director of newly-formed Zee TV and runs a program in which relatives separated during the partition are reunited.

During program, Bharat converses with Meher, a London resident adopted by a British family during partition, and realises she is Gudiya and she comes back to India. An emotional reunion ensues. Janki dies soon after; Bharat hopes to find Gautam also.

Back to present: Bharat decides to sell the store which he stubbornly refused to do despite losses. Before reaching the train, Gautam promised he will reunite with him at the store, explaining why Bharat held on to the store for so long.

Bharat realises Gautam is probably too old to still survive. He sees a vision of him, assuring that Bharat kept his promise, and asking him to move on. Tearful, Bharat marries Kumud, finally moving on.

Be the first to review “Bharat Dvd” Cancel reply