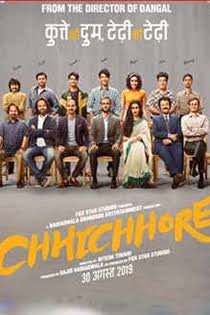 A tragic incident forces Anirudh, a middle-aged man, to take a trip down memory lane and reminisce his college days along with his friends, who were labelled as losers.

The film was released on 6 September 2019, receiving critical acclaim for its direction, acting, social message, and portrayal of hostel life in Indian colleges. It became commercially successful.[6] The film earned ₹215 crore (US$30 million) worldwide and received five nominations at the 65th Filmfare Awards – Best Film, Best Director, Best Story, Best Dialogue and Best Editing. This is marked the last theatrical release film of Sushant Singh Rajput before his death on June 14, 2020.

Aniruddh “Anni” Pathak (Sushant Singh Rajput) is a divorced middle-aged man living with his teenage son Raghav (Mohammad Samad), an aspiring engineer, who is awaiting the results of his entrance examination in the hope of enrolling in an Indian Institute of Technology (IIT). On the eve of the results, Anni gifts Raghav a bottle of champagne, promising him that they will celebrate his success together, unaware that Raghav is under intense pressure. The bottle of champagne only fuels Raghav’s worries as to what will happen if he does not make it. The next day, while checking the results at his apartment, Raghav finds out that he has not qualified for IIT in JEE – Advanced results and, afraid of being called a “loser”, he jumps off the balcony. Anni rushes to the hospital where he tries to comfort his ex-wife and Raghav’s mother Maya (Shraddha Kapoor).She blames Anni for not noticing how much pressure Raghav was in. The doctor informs Maya and Anni that Raghav’s condition is deteriorating as Raghav does not have the will to live. Desperate, Anni begins to recount the tales of his time in college, in an attempt to rekindle hope in Raghav. Raghav doubts that the stories are true. Anni, in a bid to convince Raghav, invites all his friends from college to meet Raghav, and they together begin their story.

In 1992, on the first day of college, Anni is allotted a room in the H4 hostel, which is infamous for housing “losers”. The occupants of the H4 block got the name because they repeatedly performed poorly in the annual sports General Championships (GC). A dissatisfied Anni applies to change his hostel block although a clerk informs him that his application might take time. In the meantime, Anni befriends five of his hostel mates, who develop a close friendship with him:

Gurmeet “Sexa” Singh Dhillon (Varun Sharma), a hyper-sexual senior
Himanshu “Acid” Deshmukh (Naveen Polishetty), another senior famous for his short-temper and an abusive language
Derek D’Souza (Tahir Raj Bhasin), a fourth-year student who is one of the best athletes in the college and a habitual chain-smoker
Sundar “Mummy” Shrivastav (Tushar Pandey), a sickly momma’s boy who is in first year of college
Sahil “Bevda” Awasthi (Saharsh Kumar Shukla), an alcoholic super-senior student
Over the two months, Anni forms a close friendship with the five fellows and also starts dating Maya. Meanwhile, Raghuvir “Raggie” Chalkar (Prateik Babbar), a senior from H3, which is considered the most successful hostelite house, fast-tracks Anni’s application because of Anni’s athleticism and asks him to relocate to H3, a posh and luxurious hostel, infinitely better than H4. Anni, however, wanting to stay with his friends, turns down the offer instigating Raggie to call him a loser. Raggie also reveals that he had once made a similar offer to Derek too, but Derek had foolishly turned the offer down as well. Anni, livid at being called a loser, decides that his hostel will win the coveted GC trophy so that the tag of “losers” will be removed once and for all. He teams up with a skeptical Derek, who later buys into Anni’s methods, to train his hostelites. However, he soon realizes that his team members are too weak in sports for them to have a chance at winning. To motivate them, he entreats all of them to give up one thing that they love the most till they win the GC Cup. He also comes up with a series of plans for them to distract the other participants so that they can qualify for the finals. His plans work and for the first time in the college’s history, H4 reaches second in points just behind H3 and qualifies for the final rounds where they have to win a 4x400m relay race, a basketball tournament and a chess competition to beat H3 and win the GC. Raggie, now worried that H3 might lose to a bunch of “losers”, tries to sabotage Derek and Bevda. Despite that, both of them win in their respective relay and chess finals. Anni tries to score a last point in the basketball finals to win but fails. Although H3 wins, Raggie genuinely congratulates H4 for putting up a good fight.

Back in the present, Anni and his friends tell Raghav that, despite losing the competition, the H4 hostelites were never called “losers” again because they tried to win instead of bowing out of the competition for fear of losing, and put in so much effort and fight. Anni and his friends ask Raghav to face his surgery and upcoming life, as a fighter, forgetting the tags of winner and loser. A year later, a fully recovered Raghav attends his first day of college, requesting the viewers to never ask what the name of his college is or what his rank was since he is content that he is getting to live life and enjoy it to the maximum.

Varun Sharma as Gurmeet “Sexa” Singh Dhillon, Anni’s senior who is obsessed with porn and is hyper-sexual all the time
Prateik Babbar as Raghuvir “Raggie” Chalkar, an H3 senior who detests Anni and his senior Derek
Tahir Raj Bhasin as Derek D’Souza, Anni’s senior who has great athletic skills and is a chain smoker
Naveen Polishetty as Himanshu “Acid” Deshmukh, Anni’s senior who constantly flunks his tests and has developed a bitter, swearing tongue
Tushar Pandey as Sundar “Mummy” Srivastava, an introvert who is Anni’s classmate and is tied to his mother’s apron strings
Saharsh Kumar Shukla as Sahil “Bevda” Awasthi, Anni’s super-senior who is an alcohol addict and also a known chess champion
Recurring Cast

Be the first to review “Chhichhore Dvd” Cancel reply