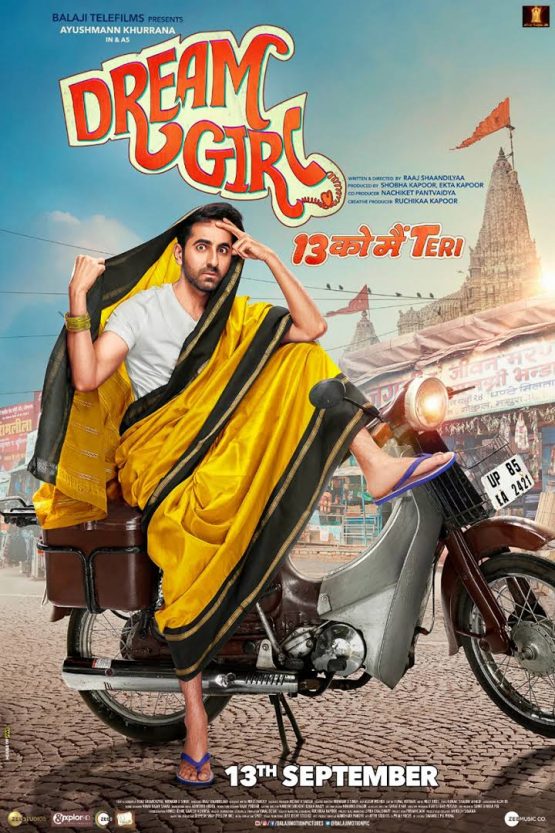 Karamveer gets a job at a call centre due to his ability to talk in a woman’s voice. He garners a big fan following but soon gets in trouble with his overzealous clients.

Principal photography began in December 2018.The film was theatrically released in India on 13 September 2019.

Karam Singh is good at impersonating the female voice from a very young age and hence keeps getting female lead roles in mythological plays (Ramayan) since his childhood. Although he protests every time that would settle for a much smaller but male character but is insisted upon pursuing the female character and takes it. He is currently unemployed and gets to perform these roles because it fetches him good money. His friend Smiley runs a liquor shop and supports him in every one of his endeavors. His father, Jagjeet Singh runs a shop dealing in funeral items and is sunk deep into loans he owes to various banks. Due to low turnover, he is unable to pay back the EMI’s.

While returning from an unsuccessful interview for a job, Karam sees an ad that promises Rs. 70,000/month salary. He reaches the given address, but the employer Mauji ‘W Ji’ (Rajesh Sharma) rejects him outright without inquiring about his qualifications. Karamveer pleads, and finally, Mauji relents and shows him his call center where only ladies work. The call-center is entertaining fantasies of people who call them, mostly men who don’t have a partner in life. Karamveer is shocked but quickly regains his composure, and answers a call in a female voice for Ms. Pooja (who works at the call center), who is frequently on leave. Mauji is impressed with his skill and immediately hires him and gives him Rs. 25,000 as advance payment. Karamveer tells his father that he has got a job at an MNC and hands him the advance payment he received. His father is happy to receive this news, while Karam celebrates with his friend Smiley. Later at the job, he garners a good fan base because of his sweet voice and sharp presence of mind.

He comes across Mahi at his customer’s home where he went to deliver products asked from his father’s shop. He is smitten by her beauty and catches her attention with some witty lines. Later they come across each other while waiting in a queue, and Karam impresses her with his funny personality. Soon love blossoms between the two and they get engaged.

At his job, Karam comes across a few people who call him regularly: Toto, a spoilt brat; Rajpal, a policeman by profession who writes couplets; Roma, editor of a magazine; Karam’s father Jagjeet and Mahi’s brother, Mahinder. Karam, initially unknown of their real identities, eventually, comes across them in his life and is surprised to know their identities. Eventually, everyone becomes obsessed with Pooja, impersonated by Karam, because of her sweet voice and friendly nature. They fall in love with Pooja and everyone wants to marry her.

Karam, frustrated with such unsolicited requests, wants to quit. His employer, Mauji rejects his resignation and blackmails him that he would expose his identity to his neighborhood, which might jeopardize his marriage. Karam decides to tell everything to Mahi but fizzles out when he realizes her brother Mahinder is also a fan of Pooja. He figures out that if he talks to his callers rudely, they would get along with their realities and stop calling him. This move backfires as everyone becomes more obsessed with Pooja, Toto attempts to commit suicide, and Rajpal threatens to abandon his wife.

Karamveer starts threatening these people to stay away from Pooja or otherwise face the consequences in an attempt to stop them from marrying Pooja.

In one such event, Karamveer as Pooja tells Roma that she is in love with her boyfriend Anurag. Roma insists upon meeting Anurag to see if he is a good guy. Karamveer meets Roma at a mall posing as Anurag. After the meeting, he comes across Mahinder, shopping at the mall who overhears Roma and Karam and tells it to Mahi, also present at the mall. Roma, already skeptical of Karamveer alias Anurag’s character, tells Mahi that Karam is engaged to Pooja when Mahi reveals that she is Karam’s fiancé, and his duplicity is exposed. Mahi, heartbroken, leaves from the mall when Karamveer is unable to explain the situation to her. Confusion breaks out in the mall and Pooja’s identity remains tumultuous.

Karam chases Mahi and takes her to his office and explains everything. Mauji misbehaves with Mahi and she slaps him in front of his staff. Karamveer defends Mahi and leaves the office, further enraging Mauji. Mahi reconciles with Karamveer. Later, she attends the play where Karam is playing the role of Radha. At the end of the play, Rajpal arrives with Mauji who claims that Karam has killed Pooja. Karam recites one of Rajpal’s couplet. Rajpal is taken aback since he shared the couplet with Pooja and nobody else.

Karam reveals that he has been impersonating Pooja all this time. This is followed by an emotional speech by Karam on growing loneliness amongst people. Roma comes with the real Pooja and exposes Mauji who is arrested by Rajpal. Toto, Mahinder, Jagjeet, and Roma learn that Karam has been impersonating Pooja all along. Finally, everyone refuses to marry Karam except Mahi.

Be the first to review “Dream Girl Dvd” Cancel reply