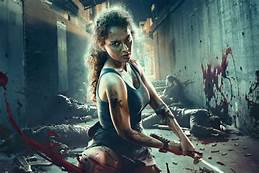 A fierce and tough international spy embarks on an action-filled adventure with guns blazing.

Dhaakad is an upcoming Indian Hindi – Langauge action-thriller film, directed by Razneesh Ghai and produced by Deepak Mukut and Sohail Maklai. Dhaakad features Kangana Ranaut as Agent Agni, and apart from Ranaut, the film stars Arjun Rampal, Divya Dutta, Sharib Hashmi in other important characters. An official announcement of the film was made on July 6 2019 with film’s poster.The principal photography started on January 2020[3], and the film was announced as the Diwali release of 2020, but due to the pandemic, and shooting delays, the film has been postponed.

The film focuses on the serious issues of child trafficking and other crimes on women and Agent Agni (Kangana) fights against the antagonist Rudhraveer (Rampal).

Be the first to review “Dhaakad dvd” Cancel reply