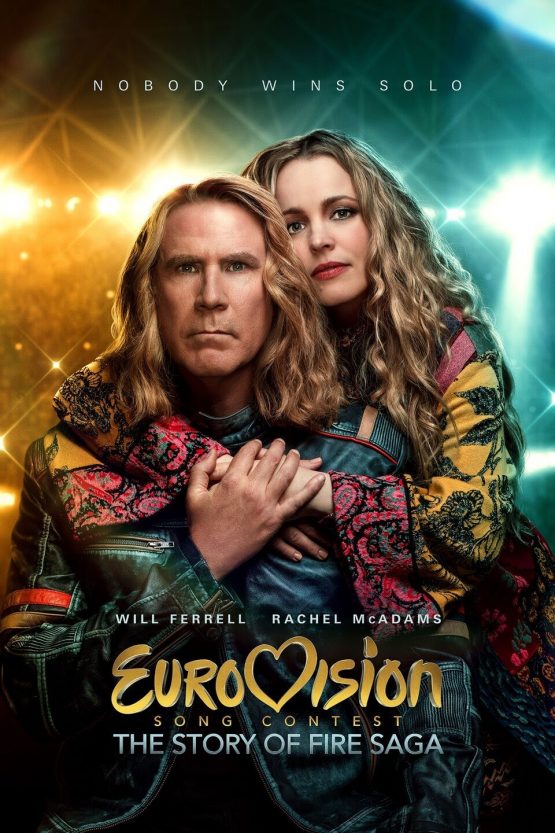 Eurovision Song Contest: The Story of Fire Saga is a 2020 American musical comedy film directed by David Dobkin and written by Will Ferrell and Andrew Steele. The film follows Icelandic singers Lars Erickssong and Sigrit Ericksdóttir (Ferrell and Rachel McAdams) as they are given the chance to represent their country at the Eurovision Song Contest. Pierce Brosnan, Dan Stevens, and Demi Lovato also star.

The Story of Fire Saga was initially scheduled for a May 2020 release to coincide with the Eurovision Song Contest 2020. However, after the 2020 Eurovision contest was cancelled due to the COVID-19 pandemic, the film was released a month later, on June 26, on Netflix. It received mixed reviews from critics.

In the small town of Húsavík, Iceland, Lars Erickssong and Sigrit Ericksdóttir, best friends since childhood, make music together as the band Fire Saga, much to the dismay of Lars’ widowed father, Erick. Lars has one dream: to win the Eurovision Song Contest. The pair apply and are randomly selected to take part in Söngvakeppnin, the Icelandic pre-selection for Eurovision. Sigrit, who believes in the old Icelandic tradition of elves, asks them to help them in the contest in the hope that, if they win, Lars will finally return her romantic feelings for him.

Due to technical difficulties, Fire Saga’s performance is a disaster, and the talented Katiana Lindsdóttir wins the pre-selection. Lars, dejected, declines to attend the boat party thrown for all the finalists and sits disappointed on the dock as Sigrit tries to comfort him. The boat suddenly explodes, killing everyone on board. Fire Saga, as the only surviving contestants, automatically become Iceland’s entry to the 2020 Eurovision Song Contest.

Lars and Sigrit arrive in Edinburgh, Scotland, where Eurovision is being held. Once there, they struggle with a new remix of their song and Lars’ desire for an elaborate stage design. They meet Alexander Lemtov, a Russian singer who is the favorite to win the contest. He invites them to a party at his house, attended by a number of real former Eurovision contestants, where he introduces Lars and Sigrit to the Greek contestant Mita Xenakis. Alexander and Sigrit spend the night together, as do Lars and Mita (although neither pair has sex). This creates tensions within Fire Saga, and almost derails their plans for the semifinal. Lars overhears Sigrit working on a new song in their hotel room and wrongly assumes it is a love song for Alexander. Katiana’s ghost appears to Lars and warns him that his life is in danger; he ignores her.

Fire Saga reconcile before the semifinals. The performance of their song “Double Trouble” initially goes very well, but is derailed by an accident involving Sigrit’s scarf and a giant hamster wheel. They recover and finish the song, but are met with deafening silence and scattered laughter. Thinking that Fire Saga have become a laughingstock, they exit the stage. Lars, humiliated, refuses to go and sit with the other artists to await the rankings, feeling that there is no chance for Fire Saga. Sigrit pleads with him to stay, put on a brave face, and not let Iceland down, even though she, too, believes they lost. Angry, and thinking that Sigrit wrote the new song for Alexander, Lars says something dismissive about the song. Sigrit then tells him that she wrote it for him. Lars is stunned; nevertheless, he returns to Iceland. However, as Sigrit learns to her surprise, Fire Saga actually is voted through to the finals.

Lars returns to Húsavík, unaware of Fire Saga’s advancement in the contest. Out on a fishing boat, he talks with his father and confesses his love for Sigrit, and Erick tells him to go back and fight for her love. However, both are unaware that Iceland is in the finals. When they are told, they both are deeply shocked. Lars jumps off the boat and swims to shore.

On his way to Reykjavík, Victor Karlosson (governor of the Central Bank of Iceland, and one of the Icelandic organisational team members) attempts to murder Lars and reveals he blew up the boat at Söngvakeppnin, as Iceland is bankrupt and cannot afford to host Eurovision the following year if Fire Saga wins. Luckily, unseen elves save Lars by killing Victor.

Lars makes it to the grand finale just in time to perform, after hitchhiking with some initially unwilling American tourists, whom he subjects to comments containing negative stereotypes of Americans. A ghost Demi Lovato (cameo as a Ghost) appears to warn Lars, but he informs her that the man who tried to kill him killed everyone on the boat is dead. Interrupting the beginning of Sigrit’s song, he encourages her to ditch their official entry and perform the song she has written for him, “Húsavík”. Watching at home, their friends and families are all touched, discovering that the song is an not only an ode to their town, featuring lyrics in Icelandic and a stunning finale, but a beautiful song that grips the entire auditorium. Erick watches the contest proudly with Sigrit’s mother, Helka. Alexander, who is revealed to be gay, bemoans the fact that his country does not accept homosexuality, and considers the possibility of moving to Greece with Mita. Fire Saga are disqualified for changing their song during the contest, but both Lars and Sigrit have lost interest in winning the competition, realizing that their relationship is more important. On stage, they share their first kiss, finally giving in to the feelings they have long had for each other.

Fire Saga returns home, where they are greeted with a hero’s welcome. Some time later, Lars and Sigrit have had a baby, and Erick and Helka have just gotten married. Fire Saga performs at their wedding reception in the local bar, with the American tourists in attendance (which Lars again hammers with negative stereotypes, but which the Americans think is just an attempt at humor). The band offers to play their Eurovision song, but everyone just wants to hear the local favorite folk song, “JaJa Ding Dong”.

Will Ferrell as Lars Erickssong, a middle-aged man with aspirations of winning the Eurovision Song Contest
Rachel McAdams as Sigrit Ericksdóttir, Lars’ bandmate and long-time best friend, who wishes for a romantic relationship with him
Molly Sandén sings all Sigrit Ericksdóttir’s songs, credited as My Marianne.
Dan Stevens as Alexander Lemtov, a flamboyant singer representing Russia
Erik Mjönes sings all Alexander Lemtov’s songs
Mikael Persbrandt as Victor Karlosson, governor of the Central Bank of Iceland, who doesn’t want Iceland to win the contest
Pierce Brosnan as Erick Erickssong, Lars’ disapproving widowed father
Ólafur Darri Ólafsson as Neils Brongus, president of RÚV, Iceland’s national public service broadcaster
Melissanthi Mahut as Mita Xenakis, another contestant, representing Greece
Petra Nielsen sings Mita Xenakis’ song.
Joi Johannsson as Jorn, a member of the Icelandic Eurovision committee
Björn Hlynur Haraldsson as Arnar, a policeman who has a crush on Sigrit
Demi Lovato as Katiana Lindsdóttir, winner of Söngvakeppnin
Graham Norton as himself, a Eurovision commentator
Jamie Demetriou as Kevin Swain, head of Iceland’s creative team
Elina Alminas as Corin Vladvitch, the Eurovision host
Jon Kortajarena as Sasha More, the Eurovision host
Alfrun Rose as Anna, a member of the Icelandic Eurovision committee
Elin Petersdóttir as Helka, Sigrit’s mother
Christopher Jeffers as Johnny John John, a rapper representing Sweden
Rebecca Harrod as Brittny, one of the American tourists
Josh Zaré as Bill, one of the American tourists
Bobby Lockwood as Jeff, one of the American tourists
Eleanor Williams as Jenn, one of the American tourists
Jóhannes Haukur Jóhannesson as Johans, one of Húsavík’s policemen
Natasia Demetriou as Nina, a crew member at the contest
Hannes Óli Ágústsson as Olaf Yohansson, a resident of Húsavík, who is obsessed with a local folk song called “Jaja Ding Dong”.
William Lee Adams as himself, a Eurovision commentator.

Be the first to review “Eurovision Song Contest: The Story of Fire Saga Dvd” Cancel reply