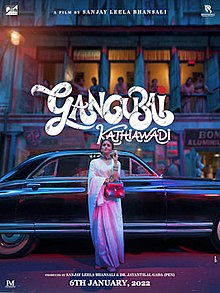 Gangubai Kathiawadi is an upcoming Indian Hindi-language biographical crime drama film directed by Sanjay Leela Bhansali and produced by Jayantilal Gada and Sanjay Leela Bhansali. The film stars Alia Bhatt while Vijay Raaz, Indira Tiwari and Seema Pahwa play pivotal roles; Ajay Devgn and Emraan Hashmi are featured in a extended cameo appearance. The narrative walks through the life of young Ganga who in no time marks her own territory and becomes Gangubai – a madame in the red light area of Kamathipura. The film is set to release in Hindi and dubbed Telugu language.

The film is loosely based on a true story, on the book Mafia Queens of Mumbai written by S. Hussain Zaidi. The film that depicts the rise of a simple girl from Kathiawad who had no choice but to embrace the ways of destiny and swing it in her favour. The film is scheduled for worldwide release in theatres on 18 February 2022.

Be the first to review “Gangubai Kathiawadi DVD” Cancel reply