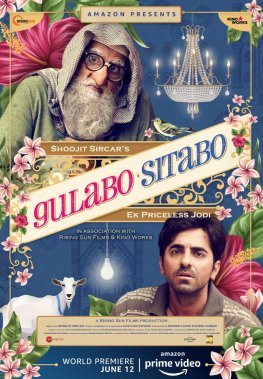 Two scheming men get caught up in a game of one upmanship, each one attracting other members to their clan and each one with an agenda of his own.

Gulabo Sitabo is a 2020 Indian Hindi-language comedy-drama film directed by Shoojit Sircar, produced by Ronnie Lahiri and Sheel Kumar, and written by Juhi Chaturvedi. Set in Lucknow, it stars Amitabh Bachchan and Ayushmann Khurrana as warring men. Due to the COVID-19 pandemic, the film was not released theatrically, but on Prime Video worldwide on 12 June 2020.

Chunnan ‘Mirza’ Nawab (Amitabh Bachchan) is a stingy old man who is regarded by most people he knows as a greedy miser. His wife, Fatima Begum (Farrukh Jafar), who is 15 years older than him, is the owner of Fatima Mahal, a run-down mansion in Lucknow whose rooms are being leased out to various tenants, many of whom are not paying appropriate rent. Begum leaves Mirza with the responsibility of tending to the property, but Mirza cannot wait for Begum’s death, so the mansion can be passed down to him. Baankey Rastogi (Ayushmann Khurrana) is a poor tenant of the mansion with his mother and three sisters. He works at a wheat mill shop, and though he is happy with most things in his life, including his relationships with his family, he says he is unable to raise enough money to pay his rent, that has been overdue for months. He also pays a meagre amount for the rent, much less than all the other tenants, and makes false excuses in order to avoid paying up, much to the chagrin of Mirza.

As a result, Mirza nags him to pay his dues whenever they cross paths. This leads to Baankey getting frequently irritated, and in an outburst of anger, he kicks the wall of a toilet block which collapses, angering Mirza, who demands Baankey pay the full cost of repair. Baankey, however, does not pay up, so Mirza attempts to make the lives of him and his family miserable, in every way possible. This is the last straw for Baankey, who vows to exact revenge on Mirza. He gets his opportunity when Gyanesh Shukla (Vijay Raaz), an archaeologist working for the government, realizes the historic value of the property. He quickly makes plans to seize it, evict everyone living in it, and declare it a government-owned heritage site. Gyanesh explains his plans to Baankey, claiming that alternative accommodation will be provided for those evicted. Baankey realizes that Mirza will end up losing his grip on the mansion, so supports Gyanesh with his motives.

Mirza soon finds out about the situation, and hires a local lawyer, Christopher Clark (Brijendra Kala). Mirza plans to get the ownership of the mansion transferred to himself once Begum dies, so he can evict his tenants and keep the mansion for himself. After a lengthy attempt to track down anyone in Begum’s family who could inherit the mansion instead of him, the last step is to get a copy of Begum’s left-hand fingerprints. Mirza successfully acquires fingerprints from a sleeping Begum, but they are from the wrong hand. He resorts to forging the prints instead.

Having noticed the mansion’s state of disrepair, Christopher introduces Mirza to Munmun, a wealthy developer who is willing to buy the mansion, demolish it, and build a modern housing complex on the land. Christopher claims that Mirza will get a lump sum of money for this, so the latter very hastily agrees.

Meanwhile, unbeknownst to Baankey and Mirza, Begum has found out about the respective plans both are making to profit from the mansion that her family has owned for generations. She will have none of it, and quickly makes her own plans to divorce Mirza and run away with another lover of hers, selling the mansion to the latter for a single rupee to safeguard it.

Unfortunately, Gyanesh’s offer of alternative housing for Baankey and the other tenants are false claims, and Gyanesh brings a couple of men to declare the mansion as a heritage site, and also says that all the tenants will have to vacate the house. Arguments and fights begin as Baankey and the tenants are furious that they won’t get alternative housing, as promised to them. But then Christopher arrives with Munmun and the developers, and a suitcase full of money for Mirza and the tenants. Mirza sees the tenants taking some of the money, and sits on the suitcase, proclaiming all the money is his, leading to further furious arguments and fights.

However, they are suddenly interrupted when a maid announces that Begum has gone. Mirza secretly rejoices at first, thinking Begum has passed away and the mansion is now his. But Begum is still alive, and she has run away to her other lover as per her own secret plan, leaving a letter behind to explain how she has laid waste to the greedy plans of Mirza and Baankey, by selling the mansion to her age-old lover, Abdul Rehman, for a rupee. Both move out, and their lives become much more subdued and depressed. This is worsened by them being shut out when Begum returns to the mansion to celebrate her 95th birthday. Begum left behind an antique chair for Mirza, and he remarks to Baankey that he sold it locally for 250 rupees. The film then closes showing the chair in an antique shop, priced at 135,000 rupees.

Be the first to review “Gulabo Sitabo Dvd” Cancel reply