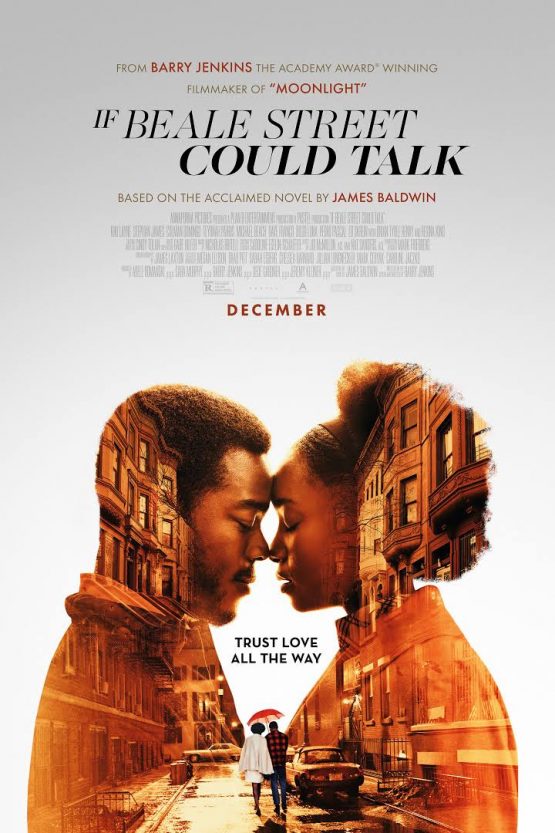 If Beale Street Could Talk Dvd

In early 1970s Harlem, daughter and wife-to-be Tish vividly recalls the passion, respect and trust that have connected her and her artist fiancé Alonzo Hunt, who goes by the nickname Fonny. Friends since childhood, the devoted couple dream of a future together, but their plans are derailed when Fonny is arrested for a crime he did not commit.

If Beale Street Could Talk is a 2018 American romantic drama film written and directed by Barry Jenkins, and based on James Baldwin’s 1974 novel of the same name. It stars an ensemble cast that includes KiKi Layne, Stephan James, Colman Domingo, Teyonah Parris, Michael Beach, Dave Franco, Diego Luna, Pedro Pascal, Ed Skrein, Brian Tyree Henry, and Regina King. The film follows a young woman who, with her family’s support, seeks to clear the name of her wrongly charged lover and prove his innocence before the birth of their child.

If Beale Street Could Talk had its world premiere at the Toronto International Film Festival on September 9, 2018, and was theatrically released in the United States on December 14, 2018, by Annapurna Pictures. It was praised for the acting (particularly by King), Jenkins’s screenplay and direction, the cinematography, and the musical score. It was chosen by both the National Board of Review and the American Film Institute as one of the Top 10 Films of 2018. The film received numerous accolades and nominations, including Best Supporting Actress wins for King at the Academy Awards and Golden Globes. It was also nominated for Best Motion Picture – Drama and Best Screenplay at the 76th Golden Globe Awards, and Best Adapted Screenplay and Best Original Score at the 91st Academy Awards.

While the film is presented in a non-linear structure, this plot summary is written in a linear fashion.

Clementine “Tish” Rivers and Alonzo “Fonny” Hunt have been friends their whole lives, and begin a romantic relationship when they are older. It is the early 1970s, and they struggle to find a place to live as most New York City landlords refuse to rent apartments to black people. They eventually find a place in a warehouse in the process of being converted to loft apartments; Levy, the Jewish landlord, agrees to rent it to them at a reasonable rate because he enjoys seeing couples who are in love, regardless of their race.

That night, Tish is harassed by a man while shopping at a mostly white grocery store. When he begins to assault her, Fonny physically throws the man out of the store. A white policeman nearby, Officer Bell, witnesses the incident and attempts to arrest Fonny, but reluctantly lets him go when the white woman who runs the grocery store vouches for them and chastises Bell for his racism.

Fonny is later arrested and accused of raping a woman named Victoria Rogers. Although it would have been nearly impossible for him to have traveled from the scene of the crime to the apartment where he was arrested in the amount of time between the rape and the arrest, the case against Fonny is considered strong due to Officer Bell’s testimony, in which he claims to have seen Fonny fleeing the scene, and Victoria having identified Fonny in a lineup as her rapist. Tish, as well as Fonny’s friend Daniel Carty, were with him at the time of the rape, but his alibi is not considered reliable due to Tish’s romantic relationship with Fonny and Daniel’s previous conviction for grand theft auto (the result of a plea bargain after being arrested for marijuana possession).

Tish visits Fonny in jail as he awaits trial, and reveals to him that she is pregnant with their baby. Fonny is excited to be a father, but is saddened by the fact that his child might be born with him behind bars. Later, Tish tells her parents, Sharon and Joseph, and sister, Ernestine, about her pregnancy. Though worried for her, Tish’s family is supportive and decide to invite Fonny’s family over to share the news. Frank, Fonny’s father, is excited about the pregnancy. However, Fonny’s highly religious mother declares the child to be a sin due to being conceived out of wedlock, and rants about how Tish and her child are damned. As Mrs. Hunt begins to leave with her daughters in disgust after Frank hits her, Sharon reminds her that she has just condemned her own grandchild, leaving her emotionally distraught as she is escorted away. In a bar, Frank and Joseph discuss how the former is worried about paying for a child and Fonny’s legal expenses, but Joseph convinces him that they will be able to provide for their grandchild the same way they provided for their children.

After tracking Victoria to her native Puerto Rico, Sharon travels there to plead with her to change her testimony. Sharon attempts to convince Victoria that she made a mistake when she identified Fonny as her rapist, but Victoria refuses. When Sharon questions whether Victoria could have seen her rapist’s face in the dark, Victoria says the police told her to identify Fonny in a line-up, and she did so. When Sharon gently touches her, Victoria begins to scream, attracting the attention of her neighbors, forcing Sharon to leave. Discouraged by the seeming hopelessness of his case and the constant trial delays, Fonny eventually accepts a plea deal.

In the last scene of the film, Tish and the child, named Alonzo, Jr., after his father, are visiting Fonny in prison. They all share a dinner together from the vending machines, while looking forward to Fonny’s eventual release.