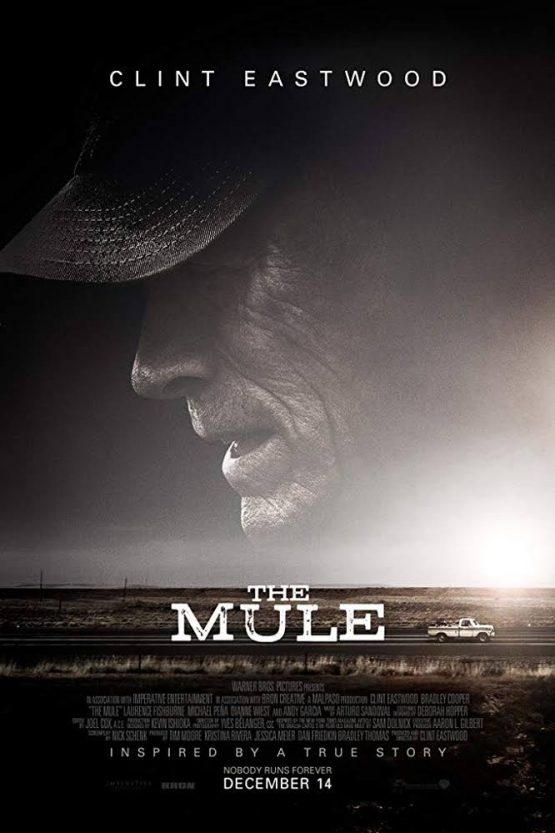 Due to financial issues, horticulturist Earl Stone becomes a courier for a drug cartel. Slowly, he grows closer to his estranged family, but his illegal activities threaten much more than his life.

The Mule is a 2018 American crime drama film produced and directed by Clint Eastwood, who also plays the lead role. The screenplay, by Nick Schenk, is based on the 2014 The New York Times article “The Sinaloa Cartel’s 90-Year-Old Drug Mule” by Sam Dolnick, which recounts the story of Leo Sharp, a World War II veteran who became a drug courier for the Sinaloa Cartel in his 80s.

Along with Eastwood, the film stars Bradley Cooper, Laurence Fishburne, Michael Peña, Dianne Wiest, and Andy García. It is Eastwood’s first acting project since 2012’s Trouble with the Curve, and his first starring role in a film directed by him since 2008’s Gran Torino. Filming began in June 2018, taking place in Atlanta and Augusta, Georgia, with other film locations in Las Cruces, New Mexico.

The Mule was released in the United States on December 14, 2018, by Warner Bros. It has grossed over $174 million. The film received mixed reviews, critics called it “poignant and charming” while also praising Eastwood’s performance, but was criticized for its lack of dramatic heft.

Earl Stone, in his 80s, is an award-winning horticulturist and Korean War veteran in Peoria, Illinois. He is facing financial ruin and is estranged from his ex-wife Mary and daughter Iris for always putting work before family. He is still on friendly terms with his granddaughter Ginny and attends her wedding rehearsal. Desperate for money, he takes up an offer from the friend of one of Ginny’s bridesmaids and becomes a “mule” transporting cocaine through Illinois for a Mexican drug cartel. Facing little suspicion due to his age, race, spotless criminal history, and strict adherence to driving laws, Earl is soon trusted with huge amounts of drugs and is paid large amounts of cash. With the money he buys a new truck, settles his financial problems, and pays for renovations of the local VFW Post, as well as his granddaughter’s wedding and education. He becomes friendly with the cartel members, who call him “Tata” (grandfather).

Meanwhile, with details from an informant, a Drug Enforcement Administration (DEA) task force is narrowing in on the cartel’s deliveries to Chicago. Tensions within the cartel erupt when Gustavo, a power-hungry cartel lieutenant, assassinates cartel boss Laton, and subsequently demands Earl be kept under tighter control.

In the middle of a $12 million cocaine shipment, Earl learns that Mary is gravely ill. After Ginny talks some sense into him, he postpones the drug delivery to make peace with Mary and stays by her side until she dies peacefully days later. After attending the funeral and finally reconciling with his family, Earl resumes the delivery as both the DEA and the cartel close in on him.

The cartel’s enforcers catch him and, upon discovering he was away to attend his wife’s death and funeral, which they respect, call the cartel leader to request leniency. The cartel underboss allows him to continue, with the caveat that if anything goes wrong it will be on the enforcers’ heads. Earl continues towards the drop point, but the DEA agents finally catch up to him and arrest him. In court, disregarding his age as an excuse and guilt-ridden over his crimes and for failing his family, Earl pleads guilty to all charges and is sent to federal prison with his family showing him their support. In prison, he returns to horticulture.

Be the first to review “The Mule Dvd” Cancel reply