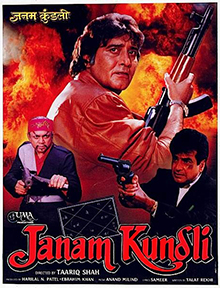 Widower Mahendra Prasad lives a very wealthy lifestyle along with his daughter, Kiran, in a palatial house.

Mahendra Prasad lives a very wealthy lifestyle along with his daughter, Kiran, in a palatial house. He is very religious and superstitious and consults his astrologer, Pandit Din Dayal Shastri, on all major issues. When Kiran informs him that she and wealthy Randhir Mehra are in love with each other, he consults Din Dayal, who predicts that the alliance is unsuitable. Mahendra convinces Kiran to marry wealthy Ravi Kapoor, which she does. On the day of the marriage, Randhir attempts to speak with Kiran, but is prevented, a scuffle ensues, police arrive, and Randhir ends up shooting a police inspector, as a result, he is arrested, tried in court, and sentenced to two years in jail. Kiran gives birth to a baby boy, Sunny, who grows up and falls in love with Madhu Sodhi. When they approach her father, Rajiv, to get the two married, Rajiv initially refuses but changes his mind when he sees Mahendra’s photograph. Watch as events unfold as prediction upon the prediction of Din Dayal come true – and the one which everyone dreads the most – the death of Sunny at the hands of his biological father!

Be the first to review “Janam Kundli Dvd” Cancel reply