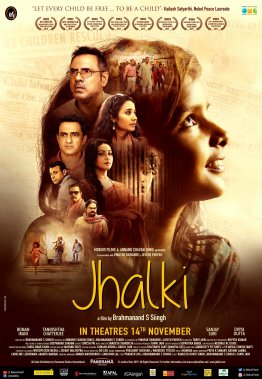 Jhalki (transl. Glimpse) is a 2019 Indian Hindi-language drama film directed by Brahmanand S. Siingh, produced by Brahmanand S. Siingh (Mobius Films) and Annand Chavan (OMG), co-produced by Vinayak Gawande and Jayesh Parekh and co-directed by Tanvi Jain. The film featuring Boman Irani, Tannishtha Chatterjee, Divya Dutta and Sanjay Suri, follows a 9-year-old street girl Jhalki, setting out to find her 7-year-old brother against the backdrop of the child slavery trade. The trailer of the film was released at the Cannes Film Festival  in May 2019.

The film has been premiered at various national and international film festivals and won 13 awards so far. It was released theatrically in India on 14 November 2019.

A life-altering disappearance of her 7-year old brother sets Jhalki off on a mission to find him at all costs.Armed with an intimate folk-tale and her own sharp mind, is Jhalki’s journey the start of a spiral that will change the lives of thousands for good? What price must she pay to get what she wants? Inspired by true events, with a backdrop of human-trafficking and child-labour, Jhalki becomes an atypical thriller of hope, courage, self-belief and perseverance, seen through the eyes of a 9-year-old girl, who will not stop anywhere short of a triumph.

Be the first to review “Jhalki Dvd” Cancel reply