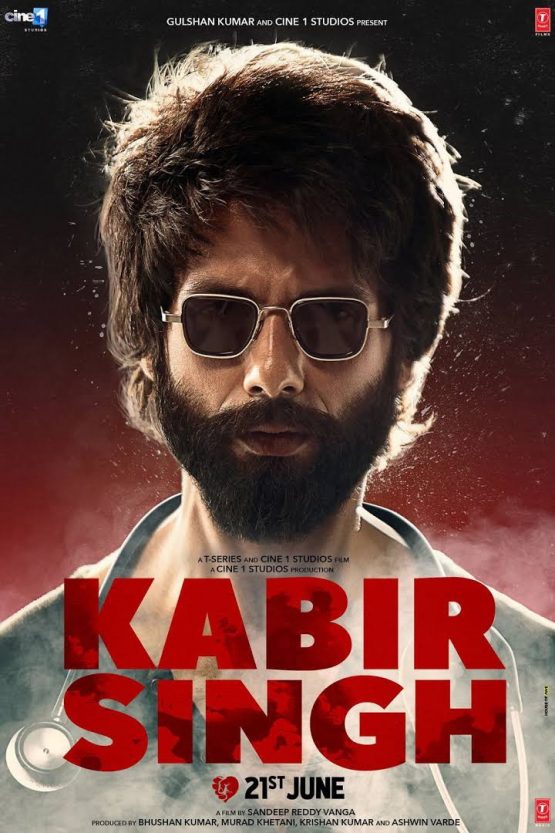 Kabir, a genius yet hostile house surgeon, falls in love with Preeti, a first-year student. When Preeti’s father spots the couple kissing, he opposes their relationship and decides to get her married.

Kabir Singh is a 2019 Indian Hindi-language romantic drama film written and directed by Sandeep Vanga. It is a remake of his own Telugu film Arjun Reddy (2017). Jointly produced by Cine1 Studios and T-Series, the film stars Shahid Kapoor and Kiara Advani. Kapoor plays Kabir Singh, a surgeon who spirals into self-destruction when his girlfriend, Preeti gets married.

Principal photography began in October 2018 and ended in March 2019. The film was theatrically released in India on 21 June 2019 and received mixed reviews, with criticism directed at it for glamorising misogyny and toxic masculinity, though Kapoor’s performance was praised. It grossed over ₹379 crore, becoming the second highest grossing Bollywood film of 2019.

Kabir Rajdheer Singh is a house surgeon at Delhi Institute of Medical Sciences. Despite being a brilliant student, he has severe anger management problems that earn the wrath of the college dean, Vijay K. Patkar. Kabir’s aggressive nature also earns him a reputation among his juniors as a college bully. After having a brawl with Amit, one of the team members from another college, who ridiculed them during an inter-college football match, Vijay asks Kabir to either apologise or leave the college. Kabir initially chooses to leave but stays back after meeting and falling in love with first-year student Preeti Sikka.

Kabir and his friend Shiva enter a third-year classroom and announce that Kabir is in love with Preeti, asserting that she is exclusive to him. Initially afraid, Preeti starts adjusting herself to Kabir’s overbearing attitude. She eventually reciprocates his feelings, and they develop an intimate relationship. Kabir graduates with an MBBS degree and leaves for Mussoorie to pursue a postgraduate degree in Orthopedic surgery. Over the course of three years, Kabir and Preeti’s relationship becomes stronger. Months later, Kabir visits Preeti’s house, where her father, Harpal, sees them kissing and throws Kabir out.

Harpal opposes Preeti and Kabir’s relationship since he dislikes Kabir’s personality. Kabir demands that Preeti must decide within six hours; otherwise, he will end their relationship. By the time she manages to visit Kabir’s house, he is drunk, injects morphine into himself, and becomes unconscious for two days, missing his elder brother Karan’s wedding in the process. Preeti is then forcibly married to another man named Jatinder from her caste. Kabir learns about the marriage from Shiva and goes to her house in protest. He is assaulted and gets arrested for making a scene. Kabir’s father, Rajdheer, ostracises him from the family home for damaging his reputation.

With Shiva’s help, Kabir finds a rented apartment and joins a private hospital as a surgeon. To cope with his emotions, he starts taking drugs, attempts one-night stands, buys a pet dog and names it after Preeti, and drinks alcohol; all of these measures are, however, unsuccessful. Within months, he becomes a successful surgeon and a high-functioning alcoholic feared by the hospital’s staff members, one reason being his high surgery count. Kabir’s self-destructive behaviour and refusal to move on worries Shiva and Kamal. He persuades one of his patients, Jia Sharma, a leading film star, to have a no-strings relationship with him, which he ends when she falls in love with him. Karan arrives at Kabir’s flat and unsuccessfully persuades him to return home.

On a day off, Kabir unwillingly agrees to perform a life-saving surgical operation. During the surgery, he collapses with dehydration. The hospital staff examine his blood samples, which show traces of alcohol and cocaine. The hospital chief files a case against Kabir, who accepts the truth on the grounds of violating his professional ethics during an in-house court hearing, despite Shiva and Karan making arrangements to bail him out. Kabir’s medical licence is cancelled for five years, and he is evicted from the flat. The next morning, Shiva manages to reach Kabir to convey his grandmother Sadhna Kaur’s death; he meets with Rajdheer, and they reconcile. Kabir quits his self-destructive habits soon after.

While leaving for a vacation, Kabir meets a pregnant Preeti sitting in a park. She initially refuses to listen or talk to Kabir, but Shiva tells her why Kabir could not accept her earlier. Convinced, Preeti reveals that she left Jatinder three days after their marriage and continued to work in a clinic. She tells Kabir that he is the child’s father, and they reunite. The pair marries, and Harpal apologises for misunderstanding their love for each other. The film ends off with the couple on the beach with their baby, after having their wedding photos taken along with Kabir’s family.

Be the first to review “Kabir Singh Dvd” Cancel reply