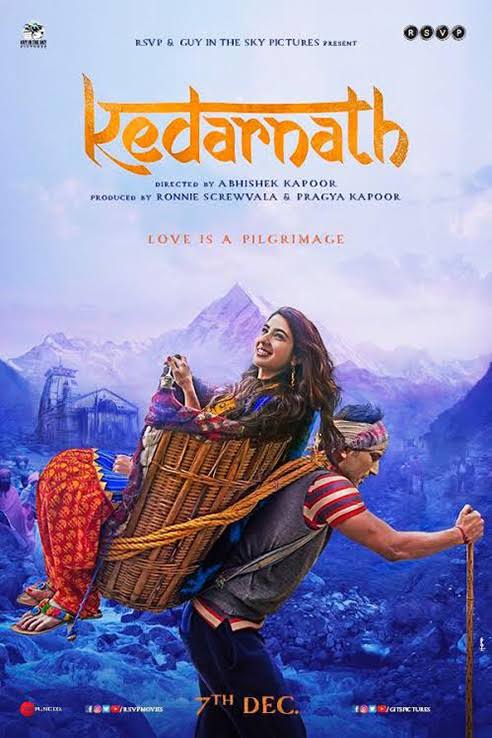 Mansoor, a reserved Muslim porter, falls in love with Mukku, the beautiful and rebellious daughter of a Hindu priest. But their love is put to the test amid misunderstandings and nature’s wrath.

Kedarnath is a 2018 Indian Hindi-language romantic drama film written, directed and co-produced by Abhishek Kapoor. Featuring Sushant Singh Rajput and newcomer Sara Ali Khan in lead roles, it tells an inter-faith love story between a wealthy Hindu Brahmin girl whose family owns a lodge and shops near the historic Kedarnath Temple in the Uttarakhand mountains and a Muslim boy who is a ‘pithoo’ (porter) working in the same vicinity. As their relationship grows closer, the pair face many obstacles, including familial disapproval and contrasting backgrounds; when the sudden rains of the 2013 Uttarakhand floods devastate the region, the couple are forced to survive against the elements and face the ultimate test of their love.

The film is produced by Ronnie Screwvala of RSVP Movies, and Guy in the Sky Pictures, along with Pragya Kapoor and it was co-written with Kapoor by Kanika Dhillon.The film began in June 2012 and eventually ended up in 2017, and principal photography commenced on 5 September 2017. The film released on 7 December 2018 to mixed reviews, but with praise for Khan’s debut performance.

In the valley around the Kedarnath temple, Mansoor Khan (Sushant Singh Rajput) is a local Muslim porter. Mandakini “Mukku” Mishra (Sara Ali Khan) is the daughter of a Hindu priest who runs the hostel for pilgrims by the temple on behalf of the temple committee. She is engaged to the nephew of the head priest. He was meant to marry her older sister, but he dumped the sister and switched to her when she grew up to be prettier, and her father agreed. Out of rebellion, Mukku flirts with the local boys and convinces them to come to her house and propose in order to embarrass her father and fiance. However, Mansoor is different, as they both notice each other and then Mukku makes the first move and hires him as her regular porter as she goes from her family home to a neighbouring village to help at her uncle’s shop. She talks and talks to him and flirts outrageously and finally gets enough of a reaction to know he feels the same way. They are trapped in the rain together, share stories of their childhood, and then share a kiss. Her envious sister tells Mansoor that Mukku is just flirting with him as she has flirted with all the other boys. Mukku is unable to defend herself when he confronts her, but starts following him around everywhere, finally sitting in the rain outside his house. Her sister tries to cover for her, but she is found out and her family come for her, planning to throw out all the Muslims, which, not-so-coincidentally, will also open up space for the new luxury hotel they are planning.

Mukku is taken home by her family who move up her wedding. Nevertheless she keeps insisting that Mansoor will come for her. Mansoor comes, but is spotted and beaten brutally by Mukku’s fiance. However, his friend pleas to save him and carries an unconscious Mansoor back to his home. While the porter community prepares to leave the valley, Mansoor decides not to leave without Mukku.

Mukku is married and slits her wrist, but is saved by her family; her now-husband taunts Mansoor with the news. Mansoor runs to Mukku and promises he will come back for her that night when she is recovered, so they can leave the valley together. Her husband plans to take his band of priests and kill Mansoor and drive out all the Muslims. All of a sudden the rains and the floods begin. Mansoor sends his mother with the other porters into the mountains and runs towards Mukku. She and her family are trying to gather the guests of their hostel in a top floor, her husband and his mother arrive driven in by the storm and Mukku refuses to go to him. And then the floor crashes down and her sister and mother are swept away along with half the other people. Mukku and her father and a few others make their way to the temple, Mansoor finds them there just as the water sweeps down. He grabs her hand in the flood, and her father holds on to her and all three are saved. After the water goes down, they make their way to a house that is still standing and wave at an Indian army helicopter that is coming to save them. Mansoor sends up the woman and child who are with them first, then Mukku’s father, then Mukku, and finally prepares to go himself. But there is only space for one more person and the father of the family has not gone yet, so Mansoor sacrifices himself and sends him instead. Mukku screams as she helplessly watches Mansoor die as the ground below him crumbles into the raging river. Three years later, Mukku is still seen living with her father and running the lodge, listening to Mansoor’s favourite song on the radio which she dedicated to him as she smiles.

Be the first to review “Kedarnath Dvd” Cancel reply