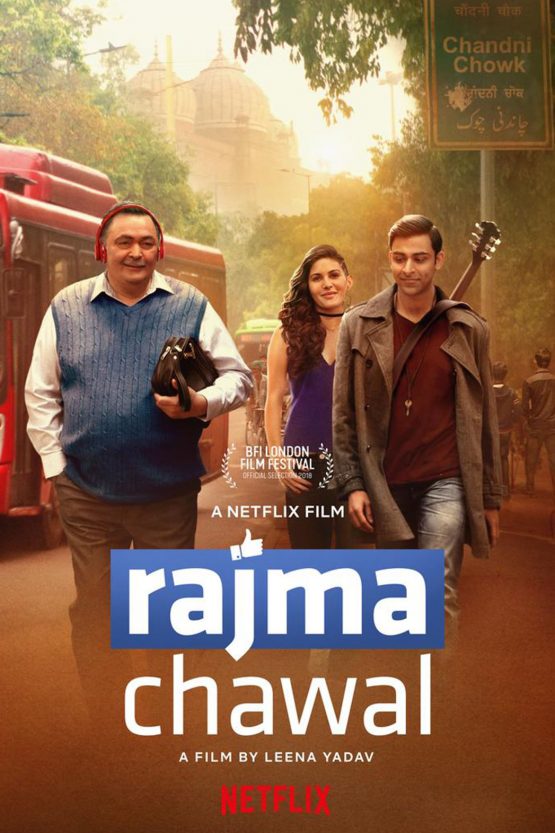 A father attempts to reconnect with his estranged son through social media, a new world for him.

Rajma Chawal (transl. Red Kidney Beans Rice) is a 2018 Hindi-language Indian comedy-drama film directed by Leena Yadav, produced by Gulab Singh Tanwar and Aseem Bajaj, which stars Rishi Kapoor, Anirudh Tanwar and Amyra Dastur in the lead. The film revolves around a father-son relationship in today’s time. The film was released by Netflix on November 30, 2018.

This article’s plot summary may be too long or excessively detailed. Please help improve it by removing unnecessary details and making it more concise. (December 2018) (Learn how and when to remove this template message)
Raj Mathur (Rishi Kapoor) and his son Kabir move from their New Delhi house back to the family’s old house in Chandni Chowk after Kabir’s mother dies in an accident. Kabir, a guitar player, is unhappy with the move and resent his dad for forcing him to leave his friends, his band and the house with the memories of his mother. Raj hides his troubles explains that he wanted to shift in with his old friends. Kabir accuses his dad becomes more withdrawn from his dad and the two start shouting and fighting with each other.

Raj is troubled by the lack of any communication between them. He decides to join Facebook in an attempt to connect with his son only to be blocked by Kabir. At Beeji’s suggestion, he steals the identity of a girl disconnected from Facebook and pretends to be “Tara” to talk to his son.

Meanwhile, the Tara’s real life persona Seher (Amyra Dastur) is a salon girl constantly borrowing money from her abusive boyfriend Baljeet to stay afloat. She is exploited by her boyfriend and running away from him since he is abusive, but she returns due to her financial situation.

Kabir opens his heart to Tara (in reality his father) on Facebook and she in turns shares the father’s feelings to Kabir. He becomes closer to Tara and also becomes closer to his father. Kabir realizes that his dad too has suffered a grievous loss of partner after his mother’s death. He meets new friends, starts a new band and even writes a new song from the poem “Tara’s dad” (in reality his own father) wrote for “Tara’s mom” (in reality Kabir’s mom). His band gets a chance for a live performance at a popular joint and he visits his New Delhi house to pay tribute to his mom. There he learns that the house has been sold & he becomes angry that his dad did not tell him. The band’s performance is a success and he sees Seher who kisses him to get away from her possessive boyfriend after which she leaves. Confused and angry he leaves his father’s home to stay with friend and is determined to find “Tara” and he messages her on Facebook.

His father Raj has seen Seher too and thinks the game is up, but with his friends find the real “Tara” Seher and convinces her to pretend to be Tara and coax his son back home. Incidentally Seher is attracted to Kabir after meeting him but is scared to fall in love because of her history. He impresses her and she falls for him.

As the relationship progresses, Seher and Kabir are together. Seher discloses that she was an obedient daughter till she became pregnant with her boyfriend’s baby. She stole money from her house and gave it to him but he dumped her, ran to Canada and left her estranged from her own small-town conservative family in Meerut. She ran away to Delhi, got an abortion and started living single. She wants to go to Meerut but her parents deny her. She goes with Kabir to celebrate Diwali with his father Raj and they end up making out in her rented flat.

The next day she secretly meets Raj, who asks her to end the relationship. Seher tells him she has fallen in love with Kabir but Raj calls her a fraud and insults her while saying that she is very different from Kabir. She breaks up with Kabir and starts working hard in the Salon to pay back all her debts. Heartbroken Kabir returns to his father Raj who asks him to concentrate on his music. Seeing Kabir, Beeji and Raj’s friend try to persuade him to help Kabir with Seher but he insults and rebuffs them.

Unable to sing, a depressed Kabir is avoiding his band and is not going to band events, leading to his music career suffering. His father pretends to have a heart attack and is taken to hospital by a distraught Kabir. Upon returning home, Seher is spotted by Kabir returning his dad’s money and she runs away while Kabir is given the truth by Raj’s friend. Kabir is furious with his father’s constant deception & lies and runs away.

Raj and his friends go to the girls hostel to find Seher, where she is staying after clearing landlord’s debt, hoping that she can help find Kabir or would know where he is. Using an app, they trace Kabir to a Metro Station, where his father finally has an honest conversation, opening up for the first time. Raj tells Kabir that his mother covered her injuries to ensure that Kabir’s exam next day is unaffected. He comes cleans about his Facebook deception and other lies, admitting that whatever he did was out of love with the intention to come closer to his son, the two eventually hug. Raj tells Kabir that he has realized that Seher is a wonderful girl and he should go after her and get her back.

Kabir finds Seher and then they get back together as Kabir’s band continues to play in the background. Kabir’s band is successful; Seher goes with Kabir to Meerut and reconciles with her family; Seher is living with Kabir in Chandni Chowk, while he sings that his heart and soul belongs in Chandni Chowk. After the performance, Kabir looks at the pigeons and leaves to spend time with Seher and his family and friends.

Be the first to review “Rajma Chawal Dvd” Cancel reply