What you are looking for?
View cart “Jhalki Dvd” has been added to your cart. 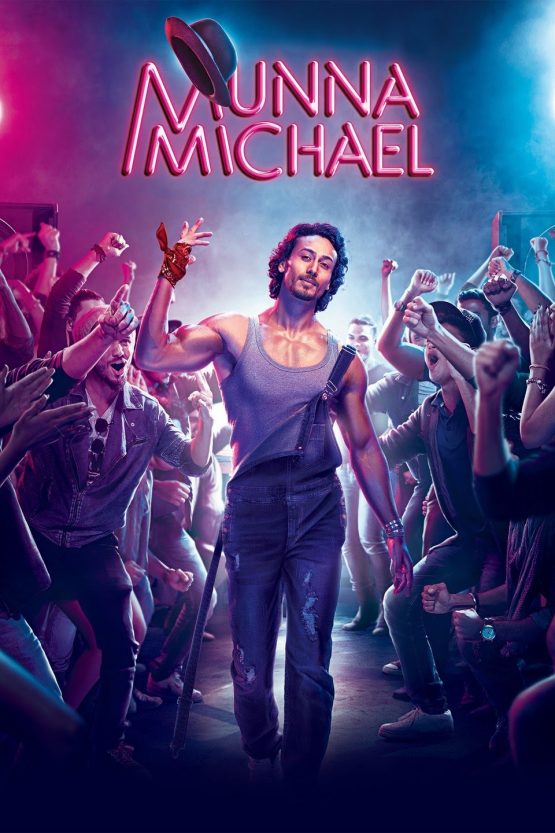 Mahinder, a gangster, hires Munna, a street dancer, to train him so that he can impress his lady-love, Dolly. However, when Dolly goes missing, Munna promises to bring her back.

Munna Michael is a 2017 Indian action dance film directed by Sabbir Khan and produced by Viki Rajani and Eros International. The film features Tiger Shroff in a lead role alongside Nidhhi Agerwal and Nawazuddin Siddiqui, The film was released on 21 July 2017.

It marks the third collaboration between Shroff and director Khan after Heropanti and Baaghi.

Manasva “Michael” Roy is a dancer inspired by Michael Jackson. One day Michael is fired from his job and disappointedly leaves the studio. On his way home, he finds a newborn baby crying on the roadside. Michael adopts the child and names him Manav “Munna” Roy. Munna, just like Michael, grows up to be an extraordinary dancer and a diehard fan of Michael Jackson. Michael doesn’t want Munna to become a dancer and instead insists him to find a proper job. Munna instead visits dance clubs with his friends and challenges their dancers, thereby earning money in the process. Michael falls ill and is admitted to a hospital. When Munna goes to see him, he once again asks him to drop his idea of dancing. Meanwhile, the dance clubs in Mumbai have blacklisted Munna and his friends, so Munna decides to try his luck in Delhi.

At a club in Delhi, Munna clashes with a guy called Balli and beats his mates. Balli happens to be the brother of Mahender Fauji, a gangster. When Mahender comes to know about the fight his brother got into, he asks a police inspector to get him Munna. Mahender watches CCTV footage of Munna dancing in the waiting room, just before the fight with Balli breaks out. Mahender is impressed with Munna’s dancing skills and asks Munna to teach him how to dance. During the dance sessions, Munna and Mahender become close friends. One day, some gangsters attack Mahender and Munna saves his life. After that Mahender brings Munna to Delhi and declares him to be like his brother. Mahender tells Munna that he wants to become a good dancer, because the girl he loves, Deepika “Dolly” Sharma is a dancer in a club. Munna advises Mahender to give Dolly a gift.

Mahender, instead of personally offering the gift, asks Munna to hand it to Dolly. Munna gives Dolly the gift and lies to her that he is a courier boy. Dolly and Munna become good friends after they meet each other a few more times. During their meetings, Dolly tells Munna that it is her dream to become a renowned dancer and that she would like to win the Dancing Star contest, to be held soon in Mumbai. Munna gives Dolly an appointment letter for the lead dancer role at the Blue Star Hotel in Meerut, which is owned by none other than Mahender. Dolly accepts the offer. Mahender meets Dolly and ask her to be friends and gives her a car and a flat. When Dolly enters the flat, she finds Balli hiding in there, who tells her that Mahender would keep her as a sex slave and nothing else. Hearing this, Dolly runs away from the house. When Mahender comes to know about the incident, he attempts to kill Balli. Munna and Mahender’s other friend step in and stop Mahender from killing Balli in his rage. During this incident Munna comes to know that Mahender is married and that he was married against his will. After losing Dolly, Mahender gets depressed and Munna promises Mahender that he will get Dolly back.

Munna returns to Mumbai and coincidentally finds Dolly who is there to participate in Dancing Star, the contest she had mentioned to Munna earlier. Dolly tells Munna that she wants to win the show so that she will be able to face her father, as she ran away from home to pursue her dancing career. Munna changes his mind to take Dolly back to Mahender and decides to help her in winning the show. Munna asks his friends to help Dolly by becoming part of his dance group. Munna had previously told Dolly that he cannot dance. One day, Dolly finds Munna dancing and training her dance group and finds that Munna had been lying to her.

Munna tells Dolly the truth. Dolly asks Munna to be her partner at the dance competition. Meanwhile, Mahender comes to Mumbai in search of Dolly. Mahender acknowledges that Munna is betraying him. Mahender brings Munna’s father Michael to Delhi and gives Munna 24 hours to bring Dolly to him or otherwise his father would be killed. Dolly and Munna go to Delhi and Dolly tells Mahender that she loves Munna and leaves his house. Munna, Michael and Dolly leave for Mumbai. Balli finds them and tries to beat them up, but instead, Munna beats Balli and his goons. During the fight Balli shoots Munna in the leg. Munna still goes onstage and performs with Dolly, and they win. Mahender, later, accepts Munna and Dolly’s love and they stay friends.

Be the first to review “Munna Michael Dvd” Cancel reply