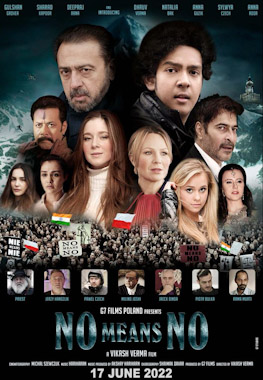 No Means No dvd

No Means No is a cross-genre action-packed, teenage musical love story, a courtroom drama that’s more like the thrill of a roller-coaster ride as each twist and turn begins to unravel to reach a conclusion that calls out for justice.

No Means No(also known as Nie Means Nie) is an upcoming Indo-Polish romantic thriller film, which was shot simultaneously in three languages: English, Hindi and Polish.Produced by G7 Films Poland and directed by Vikash Verma, it stars Dhruv Verma, Gulshan Grover, Sharad Kapoor and Anna Guzik.The film follows an Indian ski champion (Dhruv Verma), who participates in a ski championship in Poland. There he falls in love with a Polish girl. Initially scheduled to be released on 22 March 2021, but postponed due to the COVID-19 pandemic in India. Later it was scheduled for release on 5 November 2021, but release was again pushed back to 17 June, 2022.

Be the first to review “No Means No dvd” Cancel reply