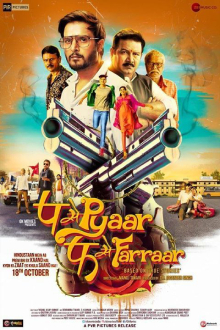 P Se Pyaar F Se Faraar (transl. L for Love, A for Absconding) is a 2019 Indian Hindi-language drama film directed by Manoj Tiwari and produced by Jogender Singh under the banner Ok Movies.It features Bhavesh Kumar, who marks his debut in the film, and stars Jimmy Sheirgill, Sanjay Mishra, Girish Kulkarni, Zakir Hussain, Akhilendra Mishra and Kumud Mishra.The story is based upon Article 15 of the Constitution of India, which prohibits discrimination on grounds of religion, race, caste, sex or place of birth, and Article 19, which deals with freedom of thought and expression.