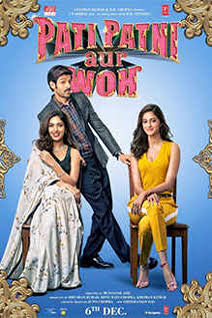 Things take an unexpected turn when Chintu Tyagi, who is married to Vedika, finds himself infatuated with Tapasya, a young fashion designer.

Pati Patni Aur Woh (transl. The husband, the wife, and ‘her’) is a 2019 Indian Hindi-language romantic comedy film directed by Mudassar Aziz and produced by Renu Ravi Chopra.The film is a remake of the 1978 film of same name and stars Kartik Aaryan, Bhumi Pednekar and Ananya Panday in the lead roles. Principal photography began on 4 February 2019 and the film was released on 6 December 2019. It had worldwide earnings of over ₹117 crore (US$16 million).

Abhinav “Chintu” Tyagi (Kartik Aaryan) is an ordinary, middle-class man from Kanpur, and a government engineer in the Public Works Department. He has been married to Vedika Tripathi (Bhumi Pednekar), a physics tuition teacher from Lucknow, for three years at the time of the story. Chintu is happy in Kanpur, but he is harassed by his controlling parents for not planning a child, and by Vedika who wants to move to a big city. He often seeks advice from his PWD colleague and childhood friend Fahim Rizvi (Aparshakti Khurana).

Bored in his day-to-day life, Chintu suddenly finds comfort in Tapasya Singh (Ananya Panday), a young wannabe fashion designer from Delhi he met at his office, who is related to his boss and briefly came to select a plot for starting her fashion business. From the day Tapasya compliments him about his smile, Chintu finds himself drawn towards Tapasya and decides to enjoy his life. At a hotel pool, he lies to her that Vedika is having an affair with a certain Rakesh Yadav, who is actually a student of her class besotten with her. Fahim is peeved when he comes to know of the matter, and laments that, in trying to save Chintu repeatedly from various situations, he will himself fall into serious trouble.

One day, Chintu is having lunch with Tapasya in his office, when Vedika calls him to tells him that she is arriving with her own lunch. With Fahim’s help, Chintu successfully wards off Tapasya in time. On another day, Chintu takes Tapasya out for lunch to a mall, but when he hears that Vedika is shopping at the same mall for her cousin Kanupriya’s wedding, he takes Tapasya to another mall for lunch followed by a bowling session, only for Vedika to catch the two together from afar. She keeps the secret of his infidelity to herself.

Seeing him lying to her of throwing her off the scent, Vedika leaves home early to attend Kanupriya’s wedding. There she discovers her ex-boyfriend Doga, a local bad boy whom she had left for Chintu, and the two resolve to leave the country. Meanwhile Chintu goes to Tapasya’s home in Delhi and meets her friends. They go to a nightclub and party; upon returning home, she seduces a drunken Chintu and is ready to kiss him, but Chintu is held by his conscience.

Chintu realises he has wronged Vedika, but it is too late, as when she returns, she tells him that she is leaving him and knows of his infidelity. He gets mad at Fahim when he reveals that his ex-girlfriend Neha had cheated on him with Fahim, and ditched him without a reason. A distraught Chintu and Fahim visit Vedika’s parents but they give them her letter, wherein she states that she is eloping with Doga, whom she truly loves. At Doga’s travel agency, the two are roughed up by Doga’s henchmen, but the police lets them go. When he visits Tapasya at her home and warns her that she cannot take Vedika’s place in his life, she asks him why he chooses to remain unhappy when she is there for him. In a drunken rage he smashes Doga’s shop and is arrested, but Fahim pays for his bail.

One morning, Rakesh Yadav, a flirt and Vedika’s student, who has come with Fahim, finds a morose and depressed Chintu at his home and informs him that Vedika is leaving for Canada for good. The three rush to the Lucknow airport, with Chintu’s family and the police in hot pursuit. At the airport, Chintu finds Vedika, Tapasya and Doga. He tries to stop them, but Tapasya spares him, saying that she will not get physical with him because he did not while in Delhi. He finds out that it is Doga who is going to Canada and that this was Doga’s plan to make him realise Vedika’s worth. Vedika forgives him and they reconcile.

Eventually another girl, Neha Khanna (Kriti Sanon), enters his office; he initially falls for her but restrains himself and refers her to another department. As she goes out the door, he calls out her name while she calls him a ‘weirdo’ to herself.