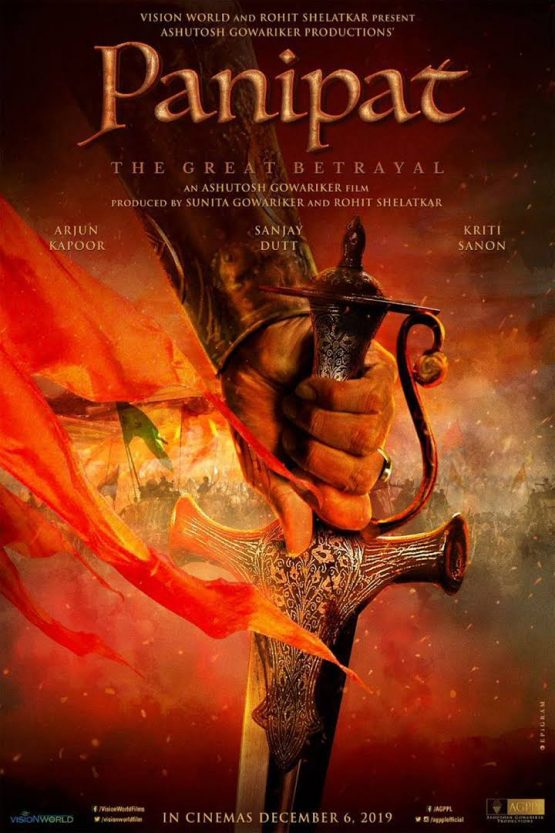 When Ahmad Shah Abdali, the king of Afghanistan, announces war, the army chief of the Marathas, Sadashivrao Bhau, gets ready for the battle by overcoming several obstacles.

Panipat is a 2019 Indian Hindi-language epic war drama film directed by Ashutosh Gowarikar.Starring Arjun Kapoor, Sanjay Dutt and Kriti Sanon, it depicts the events that took place during the Third Battle of Panipat. The film was theatrically released in India on 6 December 2019. The film was unsuccessful at the box office.

This section’s plot summary may be too long or excessively detailed. Please help improve it by removing unnecessary details and making it more concise. (August 2020) (Learn how and when to remove this template message)
By 1758, the Maratha Empire had reached its peak under the leadership of Peshwa Balaji Baji Rao aka Nana Saheb. Maratha commanders Raghunath Rao, the Peshwa’s brother, Shamsher Bahadur, the Peshwa’s half-brother, and Sadashiv Rao Bhau, the Peshwa’s cousin, defeat the Nizam of Hyderabad and capture their commander of artillery Ibrahim Khan Gardi, with Sadashiv inducting him into the Maratha Army as their commander of artillery. They return home to the Empire’s capital at Pune and are welcomed. Due to pressure by his wife Gopika Bai, the Peshwa appoints Sadashiv as the Empire’s finance minister in favour of the Peshwa’s son Vishwas Rao, which he reluctantly accepts.

Sadashiv lists the defaulters who failed to pay taxes to the Maratha Empire on time, and notes that the Rohilla chieftain Najib ad-Dawlah has the largest amount of tax due. Najib, determined to teach the Marathas a lesson, allies himself with Ahmad Shah Abdali, inviting him to Delhi. News of this formidable alliance reaches Pune, along with the news of Dattaji Shinde’s death in battle against Najib. The Peshwa appoints Raghunath Rao as the commander of the Maratha forces which will be dispatched to fight Abdali and defend Delhi. However, Raghunath asks for a large amount of money, which Sadashiv denies, citing the treasury’s condition after consecutive battles. Raghunath, therefore, refuses to march north, which leads the Peshwa to appoint Sadashiv as the commander-in-chief of the Maratha army, under the overlordship of Vishwas Rao, the Peshwa’s son and heir. The army, along with a large number of non-combatants (women, children and pilgrims), begin their long and arduous journey north.

They arrive at Dholpur, where they’re welcomed by their fellow Maratha generals— Govind Pant Bundela, Balwant Rao Mehendale, Jankoji Shinde, and the veteran Malhar Rao Holkar. They start making alliances with other kingdoms, including Maharaja Suraj Mal and Nawab Shuja-ud-Daulah, and are successful, with their army size growing to 50000 men. Abdali is also making alliances, taking advantage of the Rajput kings’ hatred for the Marathas. Sadashiv and the commanders receive intelligence that Abdali has camped on the other side of the Yamuna and spot Shuja’s flags along with Abdali’s, revealing that the Nawab had switched allegiance. Due to the heavy rains, the Marathas are unable to build a bridge to cross the Yamuna. Sadashiv decides to march north and capture Delhi and then cross the Yamuna to defeat Abdali.

Najib receives intelligence that the Marathas have retreated, from which Abdali deduces that they are marching north to Delhi. He suggests that they also march north and cross the Yamuna. Meanwhile, the Marathas defeat Najib’s general and capture Delhi. After finding out the Afghans are chasing the Marathas, Sadashiv decides to strategically capture Kunjpura Fort, which angers Abdali to such an extent that he immediately reacts by crossing the swollen Yamuna in heavy rainfall. This leaves the Maharaja of Patiala, Ala Singh, unable to send his soldiers. Food begins to dwindle, and the Maratha soldiers and civilians are forced to go without food. Although the arrival of King Araadhak Singh provides some relief to the Maratha camp, but soon after camping at Panipat, Abdali catches up with the Marathas and comes face to face. However, after hearing of a possible coup d’état at his capital in Kandahar, Abdali arranges for a truce with Sadashiv but scraps it after the latter doesn’t agree with to terms Abdali presents him. After both sides decide strategies and formations, they prepare for the final confrontation.

Parvati Bai and the civilians and pilgrims stay at a small camp towards the back, and Vishwas promises Sadashiv that he’ll never get off his elephant during the battle for his own protection. Artillery firing begins by both sides, with substantial damage done to Abdali’s army due to Ibrahim Khan’s leadership. The riflemen also start attacking. The infantry then begin the main attack, with the Marathas doing well. Overcome with fear, many soldiers of Abdali’s army retreat, but Abdali threatens them with severe punishment and forces them to return to the battle. Meanwhile, on seeing Shamsher wounded, Vishwas descends from his elephant to protect him. Sadashiv fends off the Afghans who attacked the young prince, but a bullet hits Vishwas on his head, killing him. This is a huge blow to the morale of the Marathas, who begin to lose ground from then. One by one, the Maratha chieftains are either wounded or killed. Araadhak Singh unexpectedly retreats from the battle. It is then revealed that he was angry with the Marathas for the high taxes imposed upon them, so he secretly allied himself with Abdali and passed information onto him. Seeing the tide of the battle turn, Malhar Rao retreats from the battlefield and escorts the non-combatants to safety, as promised to Sadashiv on the eve of the battle. Abdali’s soldiers close in on Sadashiv but he bravely fights back, sustaining serious injuries. He eventually succumbs to his wounds and dies, but not before making Abdali aware of his pyrrhic victory.

Back in Pune, Parvati Bai dies from grief. Abdali sends the Peshwa a letter, praising Sadashiv’s bravery and courage. The epilogue reveals that even though victorious, Abdali never returned to India. Under the leadership of Peshwa Madhav Rao, the generals Mahadaji Shinde and Tukoji Rao Holkar saved the Maratha empire from extinction, and re-captured Delhi ten years later, making the Marathas a dominant force once again.

Be the first to review “Panipat Dvd” Cancel reply