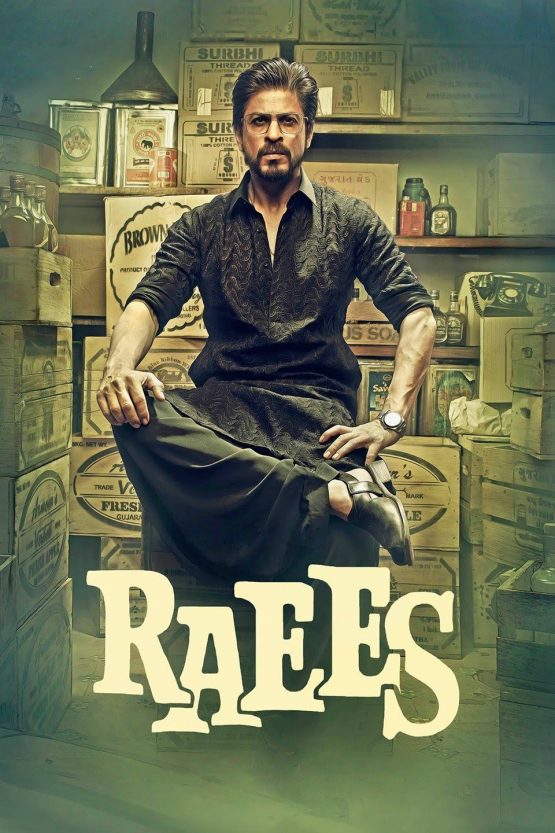 Threat looms over bootlegger Raees Alam and his business after ACP Majmudar decides to get the better of him. In order to survive and keep his trade thriving, Raees must overcome Majumdar.

Raees (transl. Rich) is a 2017 Indian Hindi-language action crime film directed by Rahul Dholakia and produced by Gauri Khan, Ritesh Sidhwani and Farhan Akhtar under their banners Red Chillies Entertainment and Excel Entertainment. It stars Shah Rukh Khan, Nawazuddin Siddiqui and Mahira Khan. Raees was said to be based on criminal Abdul Latif’s life. However, the filmmakers denied this.

The film was released on 25 January 2017 during India’s Republic Day weekend. It received mostly positive reviews from the critics and was a success at Box office, becoming the highest-grossing Bollywood film of 2017 up until it was surpassed by Golmaal Again, Tiger Zinda Hai and Secret Superstar. Raees was also the most pirated Hindi film of 2017. The film’s soundtrack has also received over 800 million streams on YouTube. The film received five nominations at the 63rd Filmfare Awards, including Best Actor for Khan.

The film begins in the mid-1960s and ends in 1991 (as evident with a newspaper date in the film). Raees (Shah Rukh Khan) lives in Fatehpur, Gujarat, a state where alcohol prohibition is in force, and gets involved in illegal liquor trade at a very young age. Along with Sadiq (Mohammed Zeeshan Ayyub), he works for a gangster Jairaj (Atul Kulkarni), who smuggles alcohol illegally by bribing the police. Raees lives by the philosophy of his mother (Sheeba Chaddha): every occupation is good, and no religion is greater than any occupation as long as it does not cause any harm to anyone. Raees decides to part ways with Jairaj and starts operating on his own. He meets Musabhai (Narendra Jha) in Mumbai, and with his help, he starts his bootlegging business. Meanwhile, an honest police officer,Inspector J. A. Majmudar (Nawazuddin Siddiqui) gets transferred to Fatehpur and starts a major crackdown on alcohol dealers.

Gujarat’s Chief Minister and Pashabhai, a shrewd politician who supports Raees for liquor and money. With his money, intelligence and tact, Raees consistently find ways to avert Majmudar and continues on with his trade. He also assists his community by offering employment to women to sew cloth bags, which he uses to smuggle alcohol and get them delivered to homes. In the meantime, Raees marries Aasiya (Mahira Khan). Due to his differences with Raees, Jairaj tries to get him killed but Raees survives and kills Jairaj.

Raees and Aasiya have a baby son named Faizan. Raees invites CM, Pashabhai and many others to celebrate with him. Raees is then offered a project by the CM to eliminate the illegal occupants at a plot of land and construct a housing project. Raees manages to get Majmudar transferred to control room department. However, tables turn as Majmudar starts tapping Raees’ telephonic conversations. Raees assaults Pashabhai during his election campaign. The CM advises Raees to go to jail for a while for his act. While still locked up, the CM and Pasha form an alliance. To counter them, Raees decides to fight the election from jail and wins.

Meanwhile, Majmudar gets transferred back to Fatehpura. Communal riots break out in the state. Considering Raees a threat, the CM puts the housing project in the green zone. Raees suddenly finds himself broke with all his money dwindled on the housing project, elections and dispatching food supplies during riots.

Musabhai offers Raees money for an assignment to smuggle gold. Serial bomb blasts rock North India. Police investigations led to Raees, where the gold he smuggled, contained RDX. A heartbroken and grieved Raees kills Musabhai for betraying his trust and killing innocent people to incite communal riots. Majmudar orders his officers to shoot Raees at sight, but Raees brings press with him and surrenders and is well aware Majmudar would kill him. Majmudar takes him to an isolated place and shoots him. In flashback, Raees recalls his mother’s teachings, his struggle in the liquor trade and memories with Aasiya. He falls dead and Majmudar and his team drive away.

Be the first to review “Raees Dvd” Cancel reply