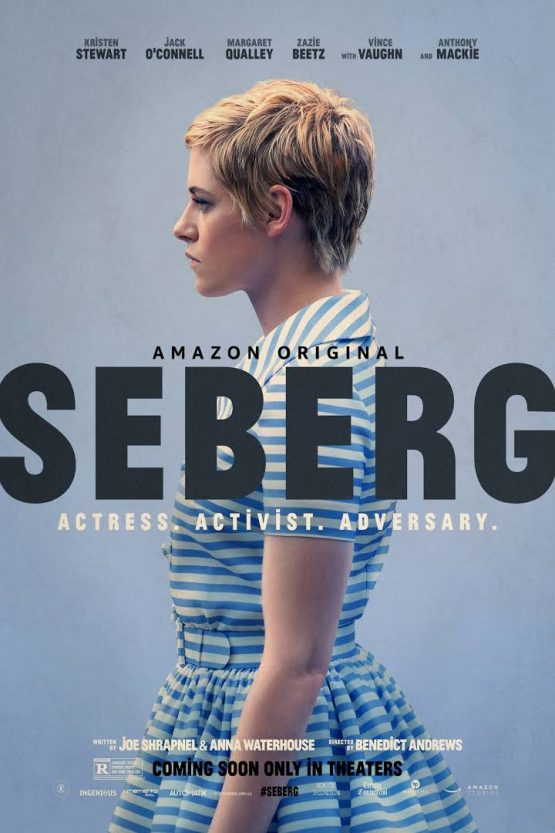 In the late 1960s, French new wave actress and “Breathless” star Jean Seberg becomes the target of the FBI due to her support of the civil rights movement and her romantic involvement with Hakim Jamal — a Black Panther activist. She soon finds her life and career in jeopardy as the overreaching surveillance and harassment starts to take a toll on everything she holds dear.

Seberg is a 2019 political thriller film directed by Benedict Andrews, from a screenplay by Joe Shrapnel and Anna Waterhouse based on the life of Jean Seberg. It stars Kristen Stewart, Jack O’Connell, Margaret Qualley, Zazie Beetz, Anthony Mackie and Vince Vaughn.

It had its world premiere at the Venice Film Festival on August 30, 2019. It was released in the United Kingdom on January 10, 2020, by Universal Pictures and in the United States on February 21, 2020, by Amazon Studios, after an awards-qualifying run on December 13, 2019.

Jean Seberg is a famous American actress known for playing the female lead in Jean-Luc Godard’s film Breathless. She is in an open marriage with her husband, Romain Gary, with whom she is raising a child in Paris. She prepares to leave on a trip to Hollywood to promote her career there and parts lovingly with her husband. On the jet flight in first class, she witnesses a white stewardess discriminating against a black passenger; she appears sympathetic to the passenger, who introduces himself as Hakim Jamal, an activist in the civil rights movement.

Upon arrival in the U.S., Seberg notices that the black activists at the airport begin a small protest there to indicate their displeasure with the treatment which Jamal and his travelling companions have received on their flight. Seberg joins the protesters and raises her fist in a black power salute in solidarity. Unbeknownst to her, the FBI are undercover at the airport and photograph her with the activists. The photograph is then processed and the FBI decides that they will shadow her activities while she is in the U.S. and arrange to have her phone conversations taped.

Seberg’s friendship with Jamal soon grows into a romance, even though Jamal is also married. The FBI’s surveillance program COINTELPRO begins to target Seberg, including recording her and Jamal having sex and showing it to Jamal’s wife Dorothy, who attacks Seberg physically. Jamal leaves Seberg after Dorothy confronts him, leaving Seberg devastated.

The FBI continues its surveillance and harassment of Seberg for years, and the bad press it generates ruins her career. In 1970, her daughter dies in infancy, and COINTELPRO agents create a rumor that the baby was fathered by a member of the Black Panther Party. The combination of her daughter’s death and the FBI’s smear campaign about the child’s paternity send her into a deep depression. Finally, in 1979, her career and personal life in shambles, she commits suicide.

Be the first to review “Seberg Dvd” Cancel reply