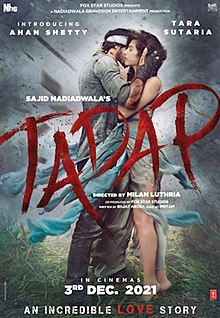 Tadap (transl. Yearning) is an upcoming Indian Hindi-language romantic action drama film directed by Milan Luthria and produced by Sajid Nadiadwala under the Nadiadwala Grandson Entertainment banner, with Fox Star Studios serving as distributor and co-producer. A remake of the Telugu film RX 100 (2018), the film stars debutant Ahan Shetty and Tara Sutaria. The film is scheduled to be released theatrically on 3 December 2021.

Be the first to review “Tadap DVD” Cancel reply