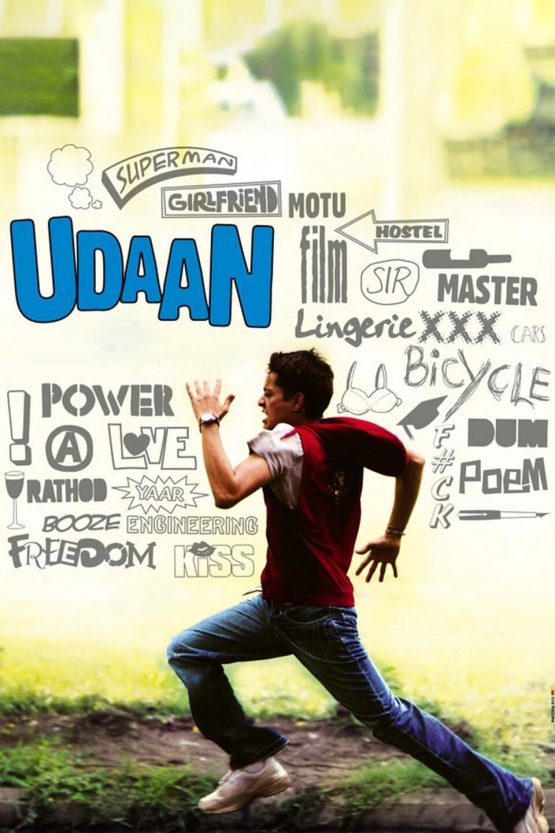 After being expelled from school, Rohan returns home to a strict father as well as a half-brother he was unaware of. He is forced to work at his father’s factory even though he wants to write.

Udaan (transl. ’Flight’) is a 2010 Indian Hindi-language coming-of-age drama film directed by Vikramaditya Motwane in his directorial debut. It was produced by Sanjay Singh, Anurag Kashyap and Ronnie Screwvala under their production companies Anurag Kashyap Films and UTV Spotboy respectively. Written by Motwane and Kashyap, the film starred newcomer Rajat Barmecha, Ronit Roy, Aayan Boradia, Ram Kapoor, Manjot Singh and Anand Tiwari. It follows the story of Rohan, who is forced to live with his oppressive father in Jamshedpur after he is expelled from boarding school.

Motwane wrote the script in 2003, but could not find a producer. He co-wrote Kashyap’s Dev.D (2009), and Kashyap produced and co-wrote Udaan. The film was set and shot in the industrial town of Jamshedpur. Mahendra J. Shetty was its director of photography, and Dipika Kalra was the editor; Aditya Kanwar was the production designer.

Udaan premiered in the Un Certain Regard section of the 2010 Cannes Film Festival, and received a standing ovation; it was the first Indian film represented at Cannes in seven years. The film was also screened at the Giffoni Film Festival and the 2011 Indian Film Festival of Los Angeles. Although it was released on 16 July 2010 to critical acclaim, it underperformed at the box-office (grossing ₹33.5 million from a production budget of ₹50 million). At the 56th Filmfare Awards, the film received seven awards: Best Screenplay and Best Story (Motwane and Kashyap), Best Cinematography (Mahendra Shetty), Best Background Music (Trivedi), Best Supporting Actor (Male) (Roy), Best Sound Design Award (Kunam Sharma) and the Best Film (Critics) Award. In 2019 Film Companion ranked Roy’s performance among 100 greatest performances of the decade list.

Seventeen-year-old Rohan is expelled from the Bishop Cotton boarding school in Shimla with three of his friends (Vikram, Benoy and Maninder) after they are seen watching an adult film outside campus in the middle of the night. Rohan returns home to Jamshedpur, where his stern, abusive, alcoholic father, and his six-year-old half-brother Arjun (about whom Rohan had not known) live. His father forces him to run every morning (racing him the last leg) and work at his father’s metalworking factory and attend engineering classes at the local university. He expresses his disappointment in his son with abuse both verbal and physical and humiliation. Rohan is a closet writer and his uncle supports his ambition.

Rohan deliberately fails his examinations so his father will give up on him, freeing him to pursue his dream of becoming a writer. His father, summoned to school to pick Arjun up, loses an important contract. Rohan comes home to find Arjun being rushed to the hospital for an unknown reason; according to his father, the boy fell down the stairs. Fearful of making things worse, Rohan tells his father that he passed his exams. His father goes to Calcutta on an urgent business trip, leaving Rohan to look after Arjun in the hospital. Rohan impresses the hospital employees including doctors and nurses with his stories and poems, and discovers that Arjun was beaten by their father after he lost the contract.

Returning from Calcutta, Rohan’s father learns that he failed his exams. Enraged, he beats Rohan during the night and apologizes the following day. Announcing that he is going to remarry again, their father decides to send Arjun to boarding school and have Rohan quit college to work full-time at the factory. When Rohan’s uncle offers to take Arjun in, Rohan’s father belittles him and throws him out of the house as Rohan begs his uncle to take him away. Rohan’s father burns his diary where he has written his poems, and later introduces his new wife and stepdaughter. Rohan spends a night in jail after damaging his father’s car when his father refuses to help him.

He comes home to find his future stepmother and her relatives in the house, and learns that Arjun is leaving for boarding school the following day. Wishing his half-brother luck, Rohan prepares to leave home. He exchanges bitter words with his father in front of his guests before he punches him and runs off. His father chases Rohan through the streets on foot, but cannot catch up to him. Rohan spends the night at his uncle’s house, and his uncle speaks to him about Arjun. The next morning, Rohan returns home and finds Arjun waiting outside while his father gets an auto rickshaw to bring him to boarding school. Rohan convinces Arjun to go with him to Mumbai, leaves a watch and a note warning that if his father looks for them then he will inform the police about how he physically abused Arjun. Both the brothers walk away from their home towards a new life.

Be the first to review “Udaan Dvd” Cancel reply