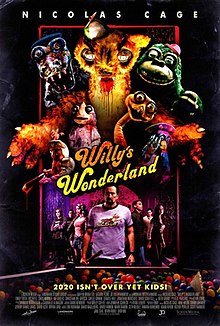 A quiet drifter is tricked into a janitorial job at the now condemned Willy’s Wonderland. The mundane tasks suddenly become an all-out fight for survival against wave after wave of demonic animatronics. Fists fly, kicks land, titans clash — and only one side will make it out alive.

A quiet drifter ends up stranded in remote Hayesville, Nevada, when his vehicle breaks down after running over a spike strip. He is picked up by mechanic Jed Love, who takes him to Willy’s Wonderland, a once-successful abandoned family entertainment center. Owner Tex Macadoo offers him work as a night-shift janitor in exchange for repairing his vehicle. Meanwhile, teenager Liv Hawthorne is handcuffed by her caretaker and Hayesville’s sheriff Eloise Lund due to her previous attempts to set the place on fire. When Lund leaves, Liv’s friends, Chris Muley, Kathy Barnes, Aaron Powers, Bob McDaniel, and Dan Lorraine, come and release her.

Be the first to review “Willy’s Wonderland dvd” Cancel reply