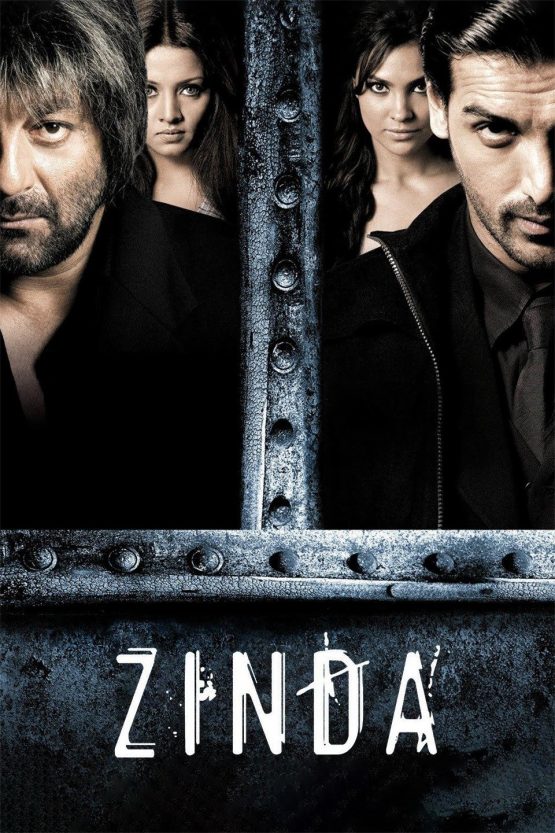 After being held imprisoned in a room for 14 years, Balajeet Roy is suddenly released. Thereafter, he goes on a quest to look for the people who wronged him.

Zinda (English: Alive) is a 2006 Indian Hindi-language neo-noir action thriller film starring John Abraham, Sanjay Dutt, Lara Dutta and Celina Jaitly. The film was directed by Sanjay Gupta and written by Gupta and Suresh Nair. Vishal-Shekhar composed the film’s thematic music, with background music composed by Sanjoy Chowdhury. It was released in India on 12 January 2006 and was declared “Average”.

Zinda has been identified as an unauthorised remake of the South Korean film Oldboy (an official adaptation of the Japanese manga Old Boy). Show East, the producers of Oldboy, who had already sold the remake rights to DreamWorks in 2004, initially expressed legal concerns but no legal action was taken as the studio had shut down.

Software engineer Balajeet “Bala” Roy (Sanjay Dutt), is happily married to Nisha Roy (Celina Jaitly), with whom he is having a baby. Bala is suddenly captured by unseen assailants and imprisoned in a cell. He is kept in total isolation for 14 years without knowing who imprisoned him or why. While in captivity, he practices martial arts which he learns from watching T.V., with the intention of using it against the people who captured him. He is finally released, again without explanation, and sets out for revenge.

He befriends a Bangkok taxi driver named Jenny (Lara Dutta), who helps him track his kidnappers. Bala tracks down the restaurant that had served his food during his entire captivity and follows a delivery moped to his captors. Bala discovers that he was held in a private prison where people can pay to have others incarcerated. Bala tortures the owner Wong Foo (Rajendranath Zutshi) for answers by plucking out his teeth with a claw hammer; he then finds out he was imprisoned for “talking too much”, and fights his way out of the building. Bala is injured during the fight, but a mysterious hooded man saves him and takes him to a taxi. The hooded man turns out to be Rohit Chopra (John Abraham). Soon Wong Foo kidnaps Jenny and tortures her. He threatens to remove Bala’s teeth with his own clawhammer, but is interrupted by Rohit. Bala takes refuge with Jenny, and they have sex. Bala is informed that his daughter is alive. Bala’s friend Joy (Mahesh Manjrekar) is killed, and Bala learns his kidnapper which is none other than Rohit.

Rohit reveals his reason of kidnapping Bala: they went to high school together, where Bala had lusted after Rohit’s elder sister Reema. After Reema rejected him, Bala spreads a false rumour that she was a whore. She became the laughing stock of their school, and committed suicide by setting herself on fire. Rohit blamed Bala for her death, and engineered his imprisonment as revenge. Rohit tells Bala that he killed Nisha, and sent his daughter, who is now 14, to a brothel. Bala beats Rohit up and knocks him off of a balcony, but grabs his hand and pleads with him to tell him where his daughter is. Defiantly, Rohit lets go of Bala’s hand and falls to his death. Bala then kills Rohit’s goons and Wong Foo. In the end, Bala learns that his daughter is safe; Rohit had lied to him about selling her to a brothel to torment him. He finds her sitting on a river bank, and goes to meet her. He happily lives with his daughter.

Be the first to review “Zinda Dvd” Cancel reply