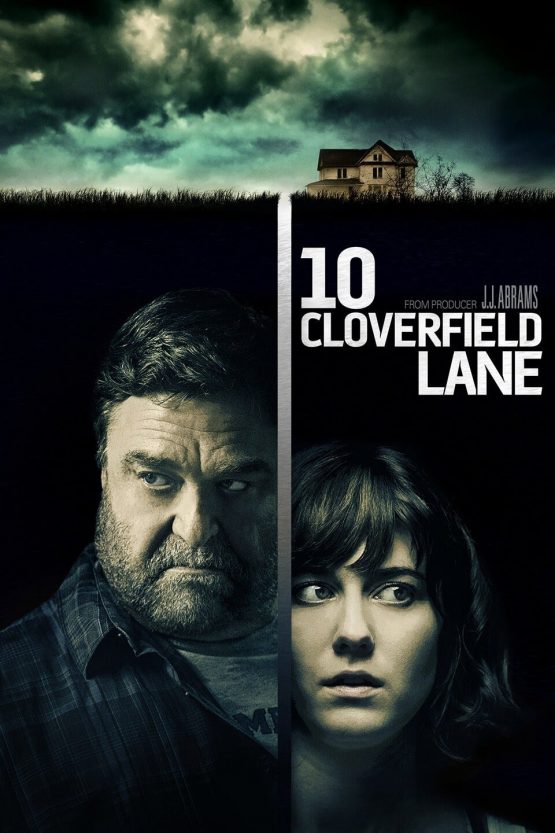 After an accident, Michelle finds herself in a bunker with Howard, a stranger who informs her that she is safe with him and the world outside is inhabitable. Left dazed, she decides to escape.

10 Cloverfield Lane is a 2016 American science fiction psychological thriller film directed by Dan Trachtenberg in his directorial debut, produced by J. J. Abrams and Lindsey Weber and written by Josh Campbell, Matthew Stuecken, and Damien Chazelle. The film stars Mary Elizabeth Winstead, John Goodman, and John Gallagher, Jr. It is the second installment in the Cloverfield franchise. The story follows a young woman who, after a car crash, wakes up in an underground bunker with two men who insist that an event has left the surface of Earth uninhabitable.

The film was developed from a script titled The Cellar; but under production by Bad Robot, it was turned into a spiritual successor to the 2008 film Cloverfield. It is presented in a third-person narrative, in contrast to its predecessor’s found-footage style. Principal photography took place under the title Valencia in New Orleans, Louisiana, from October 20 to December 15, 2014.

10 Cloverfield Lane premiered in New York City on March 8, 2016, and was released in select countries on March 10. It was released in the United States on March 11, 2016, in both conventional and IMAX formats. The film grossed over $110 million worldwide and was praised for its performances, screenplay, and atmosphere. A sequel, The Cloverfield Paradox, was released on February 4, 2018.

After breaking up with her fiancé Ben, Michelle packs up her apartment and leaves New Orleans. While driving through rural Louisiana late at night, she hears news reports of blackouts in several major cities before her car is sideswiped by a truck trying to overtake her, causing a crash that leaves her unconscious. She wakes in a locked room, an apparent leg brace chained to a pipe, with bedding and her packed bag lying nearby. A man enters the room and introduces himself as Howard, explaining that they are in a bunker beneath his own farmhouse about forty miles outside of Lake Charles. He claims he found her in the ditch and saved her life and also that the air outside is radiated by a nuclear or chemical fallout from an apparently very recent “attack.”

He later takes her on a tour of the well-stocked bunker, where she meets Emmett, another survivor. Howard, noticing Michelle’s suspicion, shows her the viewport of the bunker’s entrance, where she sees two dead and decayed pigs outside, evidence of the fallout. Michelle also sees Howard’s truck and recognizes it as the truck that drove her off the road. She privately relays her concerns about Howard’s motivations to Emmett, who dismisses them and claims to have seen the attack with his own eyes. He was not abducted as she was but rather sought Howard’s refuge voluntarily.

During their first dinner together, Michelle stokes Howard’s jealousy to incite rage, during which she steals his keys and runs to the hatch in an attempt to escape. As she goes to open the door, however, a woman with facial lesions exits a car and beats the window, begging to be let inside. Michelle does not open the door, returning to the bunker and leaving the woman to her fate.

Howard opens up about his daughter, whom he describes as being “not with us anymore.” He enlists Michelle to fix the air-filtration unit when it fails since she is small enough to fit through the vents; while repairing it, she finds a locked skylight with the word “HELP” scratched on the inside of the glass. Michelle and Emmett discover that Howard’s purported daughter was a young girl who had gone missing about two years earlier, and they suspect he abducted her. They make plans to escape, creating a makeshift hazmat suit in secret. When Howard discovers that tools and parts are missing, he accuses the two of stealing them, threatening to immerse them in a barrel of perchloric acid. Emmett takes responsibility, claiming that he was building a weapon so that Michelle would respect him. Howard pulls his gun and kills Emmett. He tries to comfort Michelle, telling her that he killed Emmett to protect her. In shock, Michelle makes final preparations to leave when she is surprised by Howard. She manages to flee from him with the suit. En route, she knocks over the acid barrel, which starts an electrical fire in the bunker and inflicts serious chemical burns to Howard’s body. Michelle manages to escape just in time before the perchloric acid explodes, destroying the bunker and killing Howard.

Michelle dons the suit and escapes the burning bunker, fleeing onto Howard’s homestead. Seeing signs of living wildlife, she takes off the suit’s helmet; but then she suddenly sees a giant biomechanical alien spacecraft, drawn by the bunker explosion. A quadrupedal creature drops from the craft and chases Michelle, forcing her to hide in a shed. She then races towards the farmhouse, but the craft appears and emits a green gas that forces Michelle back into the suit. Her delay allows mechanical appendages from the ship to capture her, but she is able to craft a Molotov cocktail from a bottle of whisky to throw into the ship. The fireball destroys the ship, causing it to crash and forcing the appendage to release her. After recovering, she is able to take the dead woman’s car and escape.

As she nears the Texas border, she hears radio chatter instructing any survivors to head to Baton Rouge to evacuate, but also requesting the help of anyone with medical or combat training in Houston. At a crossroads, she pauses a moment before driving off towards Houston. In the distance, two larger alien craft can be seen in the sky.

Be the first to review “10 Cloverfield Lane Dvd” Cancel reply