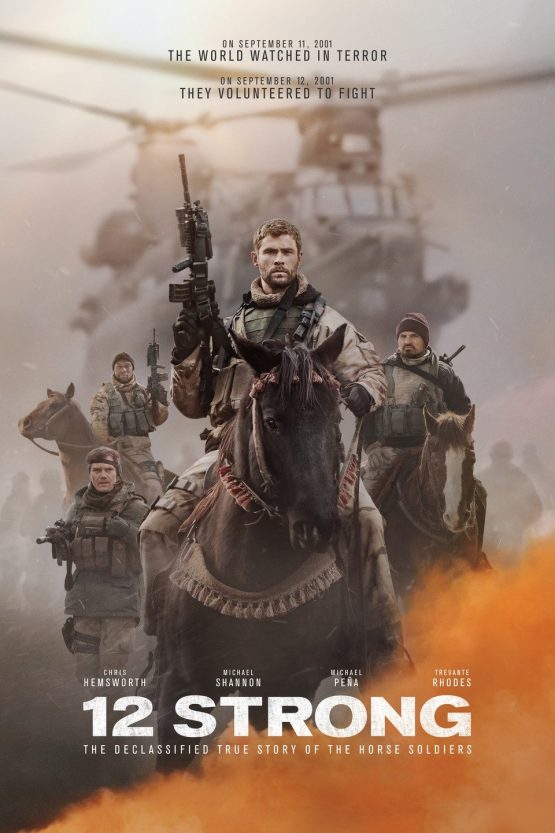 In the wake of the September 11 attacks, Captain Mitch Nelson leads a US Special Forces team into Afghanistan for an extremely dangerous mission. Once there, the soldiers develop an uneasy partnership with the Northern Alliance to take down the Taliban and its al-Qaida allies. Outgunned and outnumbered, Nelson and his forces face overwhelming odds in a fight against a ruthless enemy that takes no prisoners.

Principal photography began in January 2017 in New Mexico. The film was released in the United States on January 19, 2018 by Warner Bros. Pictures, in standard and IMAX theaters. It received mixed reviews from critics, who praised the cast and action but criticized the by-the-numbers execution and lack of hindsight of the War in Afghanistan.

Mitch Nelson, a U.S. Army captain with Green Berets Operational Detachment Alpha (ODA) 595, is moving into a new home with his wife and daughter on September 11, 2001, after receiving an assignment to staff duty under Lieutanant Colonel Bowers. As news of the devastating terrorist attacks that day break, Nelson volunteers to lead 595 into Afghanistan. Bowers initially refuses, but veteran soldier CW5 Hal Spencer, previously scheduled to retire, persuades Bowers to give Nelson command of 595 again, as well as volunteering himself for the deployment. After leaving their families, 595 travels to Uzbekistan on October 7, 2001. After being briefed and evaluated by COL Mulholland, Commander of 5th Special Forces Group, Nelson and 595 are picked to fight alongside Northern Alliance leader Abdul Rashid Dostum.

ODA 595 is inserted covertly in Afghanistan aboard an MH-47 Chinook flown by 160th SOAR on 19 October 2001. They land 40 miles south of Mazar-i Sharif, the country’s fourth-largest city and a longtime stronghold of the Taliban, where they meet Dostum. Six of the 12 members, led by Nelson, leave with Dostum to the mountains, while the other six remain in a fortified camp nicknamed “The Alamo” under Spencer’s command. Dostum is attempting to capture the northern Afghanistan city, while battling Taliban leader Mullah Razzan, who rules local communities brutally under strict Sharia law, and has murdered several people, including Dostum’s family. Although the warlord is initially skeptical of Nelson’s abilities, Nelson gradually earns Dostum’s respect. In one battle, however, Dostum makes a tactical error, costing several casualties. Nelson accuses Dostum of acting carelessly with the lives of his men and of withholding valuable information, while Dostum retorts that he still feels that Nelson, and the U.S. are not willing to pay the potential price of the conflict, and tells Nelson that he needs to use his heart and mind to “be a warrior” instead of a soldier. The two eventually reconcile, and, after splitting off a three-man element under SFC Sam Diller to strike a Taliban supply route, and being joined by Spencer’s half of ODA 595, continue to work together. They win several victories with Dostum’s leadership and manpower and American airpower, making significant progress towards Mazar-i Sharif. Suddenly, however, Spencer informs Nelson that another ODA, 555, has been dispatched to support Atta Muhammad, another Northern Alliance leader, who is Dostum’s political rival. When Nelson is forced to tell Dostum, the furious warlord and his men promptly abandon 595.

Following Dostum’s departure, Nelson plans to continue operating against the Taliban with his Americans and the few Afghan fighters remaining with them. Encountering a large force of Al-Qaeda and Taliban fighters and armored vehicles, ODA 595, rejoined by Diller and his element, uses air support to eliminate many of the fighters and most of the armor, but are discovered and attacked. Spencer is critically injured by a suicide bomber, and the team is about to be overrun under heavy Taliban and Al-Qaeda pressure when Dostum returns with his forces. Carrying out the U.S. Army’s first cavalry charge of the 21st century, the American and Northern Alliance forces disperse the Taliban and al-Qaeda, and Dostum tracks down and kills Razzan. After Spencer is medevaced, Nelson and Dostum continue to Mazar-i-Sharif but find Atta Muhammad has beaten them there. Against expectations, Dostum and Muhammad meet peacefully and put aside their differences. Impressed by Nelson and the Americans’ efforts, Dostum gives Nelson his prized riding crop and tells him that he will always consider Nelson a brother and fellow fighter but remember that Afghanistan is the graveyard of empires. Spencer ultimately survives, and all 12 soldiers of ODA 595 return home after 23 days of almost continuous fighting in Afghanistan.

The film’s penultimate moment shows a photo of the Horse Soldier Statue at the World Trade Center in New York City, based on the soldiers of ODA 595 and their victory in the early stages of the response to the September 11th attacks, dedicated to all United States Special Forces. The film then ends with a photo of the actual members of ODA 595, in combat fatigues, upon whom 12 Strong was based.

Be the first to review “12 Strong Dvd” Cancel reply