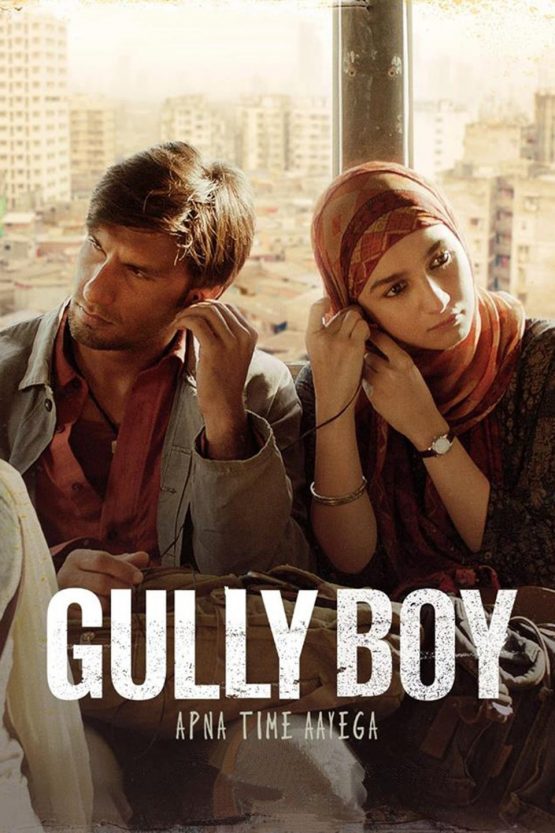 Murad, an underdog, struggles to convey his views on social issues and life in Dharavi through rapping. His life changes drastically when he meets a local rapper, Shrikant alias MC Sher.

Gully Boy is a 2019 Indian Hindi-language musical drama film directed by Zoya Akhtar, and written by Zoya Akhtar and Reema Kagti. The film is produced by Ritesh Sidhwani, Zoya Akhtar and Farhan Akhtar under the banners of Tiger Baby Films and Excel Entertainment productions, with Nas as an executive producer. It stars Ranveer Singh and Alia Bhatt, and features Kalki Koechlin, Siddhant Chaturvedi, Vijay Varma, Amruta Subhash and Vijay Raaz in supporting roles. Inspired by the lives of Indian street rappers Divine and Naezy, the film is a coming-of-age story about an aspiring street rapper from the Dharavi slums of Mumbai.

Principal photography for Gully Boy began in January 2018 and wrapped up in April 2018. It was premiered at the Berlin International Film Festival on 9 February 2019 and released on 15 February 2019 to positive reviews from critics. With a global gross of over ₹238 crore ($37 million), it emerged as the seventh-highest-grossing Hindi film of the year. It was selected as the Indian entry for the Best International Feature Film at the 92nd Academy Awards, but it was not nominated. Gully Boy won a record 13 Filmfare Awards, including Best Film, Best Director, Best Actor (Singh) and Best Actress (Bhatt), and became the second film to win all four acting awards, 21 years after Kuch Kuch Hota Hai (1998).

Murad Ahmed (Ranveer Singh), a final year college student, lives in the Dharavi slums of Mumbai. His abusive father Aftab Shakir Ahmed (Vijay Raaz) brings home a much younger second wife, much to the chagrin of the family. Murad nurtures a fascination for rap music. His longtime and overtly possessive girlfriend Safeena Firdausi (Alia Bhatt) is training to be a surgeon and routinely meets him in secret.

Forced to work part-time as a chauffeur after his father is injured, Murad starts to write, with his lyrics informed by the inequalities he observes while on the job. Making the acquaintance of local rapper Shrikant “MC Sher” Bhosle (Siddhant Chaturvedi) whom he saw performing in his college fest, he is drawn into performing his lyrics at underground shows and rap battles and eventually uploading a video on YouTube.

Berklee College student Shweta “Sky” Mehta (Kalki Koechlin), an evolving musician, reaches out to Murad and Sher after seeing the video, offering to collaborate on a new song. The accompanying video, which is shot in Dharavi, rapidly becomes popular. Murad shares an intimate moment with Sky, later lying to Safeena about it. When Safeena finds out, she reacts violently towards Sky by smashing a bottle of beer on her head.

As a result, she is brought in by the police but is not arrested as Sky doesn’t press charges against her. Murad eventually breaks up with Safeena due to her possessive attitude. As Aftab’s violence towards him, his brother and his mother escalates, Murad decides to leave home with his mother and brother and work full-time for his uncle Ateeq Khan (Vijay Maurya).

Later, when Sky expresses her romantic feelings for him, he declines her as he still loves Safeena and decides to reconcile with her. Murad and Sher enter a contest to open for Nas at his Mumbai concert, and Murad advances to the finals after a successful rap battle. Murad’s confidence grows from interacting with rap fans’ appreciation of his performances, and he finally stands up to Aftab and Ateeq when they belittle his passion. He later gets back together with Safeena. He goes on to win the contest and becomes one of India’s top rappers. The film ends with his friends, family and Safeena watching him happily as he begins his triumphant opening performance.

Be the first to review “Gully Boy Dvd” Cancel reply