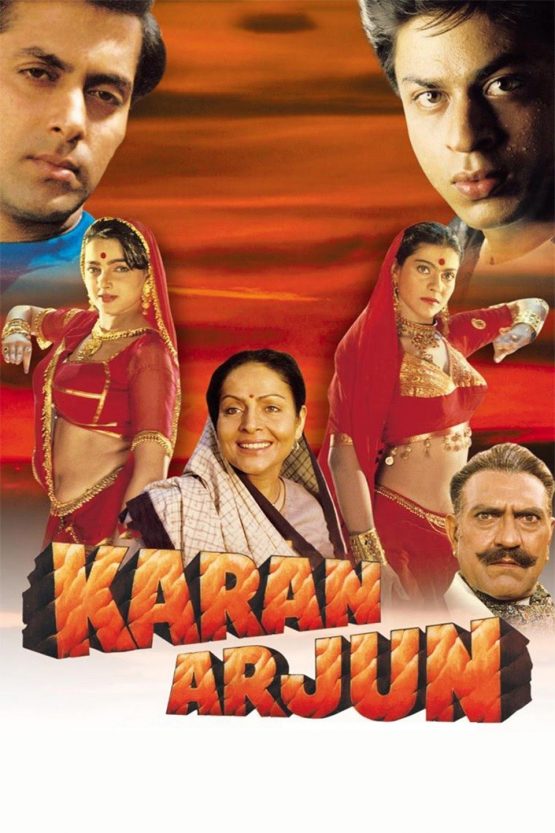 Durga’s two sons, Karan and Arjun, set out to avenge their father’s death, only to get themselves killed by their evil uncle. Years later, the two are reincarnated to bring justice.

Karan Arjun is a 1995 Indian Hindi-language action thriller film directed and produced by Rakesh Roshan, starring Salman Khan, Shah Rukh Khan, Mamta Kulkarni, Kajol, Rakhee Gulzar, and Johnny Lever in lead roles, with Amrish Puri portraying the antagonist and Arjun, Jack Gaud, Ranjeet, and Aasif Sheikh in supporting roles. It tells the story of the titular two brothers who seek revenge from their greedy uncle for murdering their father, but are killed by him and are reincarnated to complete the revenge.

In a village in Rajasthan, Durga Singh (Rakhee Gulzar) is a poor woman raising her two beloved sons Karan (Salman Khan) and Arjun (Shah Rukh Khan). When Munshiji (Ashok Saraf) of Thakur Sangram Singh, comes to talk to Durga, Durga reveals that their father was the Thakur’s son, who had married her against his father’s wishes. Durjan Singh (Amrish Puri), a relative of Thakur, killed Durga’s husband to prevent him or his family from inheriting the Thakur’s estate.

Durjan kills Thakur and when he learns of his plans to sign over the estate to Karan and Arjun, he brutally murders both with the help of his brothers-in-law, Nahar (Arjun) and Shamsher (Jack Gaud). Durga prays to Goddess Kali to bring her sons back. Miraculously, her prayers are heard and her sons are still alive, but are separated and grown into different families with no knowledge of their past lives – Durga is unaware of this miracle.

20 years pass. Arjun is grown up as Vijay. He falls in love with the wealthy Sonia (Kajol), but doesn’t know that Sonia will be married with Durjan Singh’s son, Suraj (Aashif Sheikh). Meanwhile, Karan is grown up as Ajay. He is chased upon by tomboy Bindiya (Mamta Kulkarni) who loves him. He soon works for Saxena (Ranjeet), Sonia’s father and Durjan’s partner in his illegal arms trading business. Knowing that Sonia loves Vijay, Suraj attempts to kill him but ends up burning the farm of Vijay’s Uncle. At Sonia and Suraj’s engagement party, Vijay arrives and attacks Suraj. Ajay is sent to kill Vijay and the two start to fight, which is suddenly interrupted after a bolt of lightning strikes in between them. Saxena tries to shoot Vijay, but Ajay stops him whilst shouting for Arjun to run. This is something that Ajay had said to Vijay in their previous life when he was being attacked. Ajay is sent to prison while Vijay escapes. Sonia is forcibly taken to Durjan’s house to marry Suraj.

Vijay and his friend Linghaiyya (Johnny Lever) travel to save Sonia. Everybody in the village who sees him is stunned and calls him Arjun. He finally remembers his past life and reunites with Durga, where he gets to know about his brother Karan, who is now Ajay. Vijay saves Ajay and explains the whole situation that they were brothers named Karan and Arjun. Meanwhile, Bindiya joins them. Durjan hears about Karan and Arjun’s return but refuses to believe it, so his brothers-in-law attempted to bring them before him but instead they were killed by Karan and Arjun in a similar way as they killed the two brothers.

At the village temple of Goddess Kali, rituals are held for Sonia and Suraj’s wedding. Karan/Ajay and Arjun/Vijay frighten Durjan by convincing him that they are back. Soon, Saxena and Durjan have a falling out, in which Saxena tells Sonia to run away with Arjun, but it’s revealed to be a trap. Karan succeeds in creating chaos, letting Arjun and Sonia escape from the trap. Vijay managed to kill Suraj in a closed-range shot, upon which Durjan kills Saxena in a fit of rage.

After all his henchmen were killed, Durjan attempted to kill Karan and Arjun but instead they overpowered him. He runs to Durga and begs her for forgiveness. However, she declines it and orders her sons to fulfill their revenge by killing him. Later, Arjun marries Sonia and Karan marries Bindiya with the whole family reunited.

Be the first to review “Karan Arjun Dvd” Cancel reply