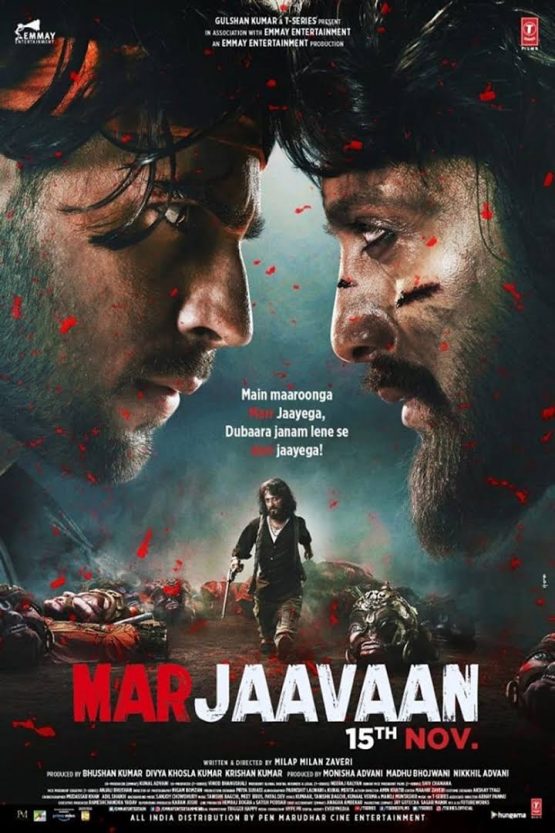 Gangster Raghu works for Narayan Anna, the local don, and is his favourite henchman. However, Vishnu, Narayan’s son, is jealous of Raghu’s popularity with his father and schemes against him.

Marjaavaan (transl. I will die) is a 2019 Indian Hindi-language romantic action film written by Milap Milan Zaveri. It is directed by Zaveri and produced by T-Series and Emmay Entertainment. Marjaavaan stars Sidharth Malhotra and Tara Sutaria with Riteish Deshmukh as main antagonist and Rakul Preet Singh in a parallel lead character. It was described by co-producer Bhushan Kumar as a violent and dramatic love story.

The music of Marjaavaan was released under T-Series and became a chartbuster with songs like “Tum Hi Aana”, “Thodi Jagah” and the item number “Ek Toh Kam Zindagani”. It was distributed by Pen India Limited. After change of release date three times, Marjaavaan finally premiered worldwide in theatres on 15 November 2019 and took mixed to negative reviews from film critics. It emerged as an average grosser at the box office.

Raghu is a loyal goon to the local thug Narayan Anna who controls the water mafia in Mumbai. Anna’s dependence on Raghu doesn’t sit well with Vishnu (Anna’s son), whose complexes arise from more than just his short stature, as he is only three feet tall. When Raghu falls for Zoya, a mute musically-inclined Kashmiri girl who teaches children music, Vishnu jumps at the opportunity to use it to discredit his father’s most favorite goon.

Vishnu kidnaps Gaitonde (one of his father’s enemies) and tells a kid Zoya had selected for her music festival to shoot him. Zoya sees this and flees but Vishnu is already alerted of her presence. Vishnu tells his father that there was an eyewitness to Gaitonde’s murder and that witness is Zoya, so Anna orders Raghu to kill Zoya, not knowing that Raghu loves her. Raghu finds Zoya and tries to run away from Vishnu and his father but Vishnu catches them and orders Raghu, Zoya, and all the kids to be killed. Vishnu’s father tells Raghu he and the kids will be safe if he kills only Zoya, as she is the eyewitness to Gaitonde’s murder. Zoya tells Raghu to kill her so that he and the kids remain safe. Zoya gives Raghu the gun, places her thumb over his, pulls the tigger and dies in his arms.

The police arrest a traumatized Raghu for Zoya’s murder. In jail, Raghu becomes depressed and broken. Zoya is buried by the children, Raghu’s friends and her friends. Vishnu tries to get Raghu killed in jail, knowing if he is released, he will take revenge. However, Raghu beats up the goons Vishnu hired. Vishnu then cuts off Raghu’s friend Mazar’s leg because Mazar kicked him. When Vishnu’s father tells him that Raghu will be sentenced to life, Vishnu helps Raghu get out by bribing the proofs, planning to kill Raghu upon his release. However, when Raghu returns, Vishnu sees that Raghu is not the same after Zoya’s death. His father tells him that Raghu died the day he killed Zoya. Vishnu tries various ways to bring Raghu back to his old ways but fails.Raghu had completely changed and all his old habits had changed. Vishnu’s father catches him and warns him against this but Vishnu angrily kills his father and sends goons to kill Raghu. However, Raghu kills them all and buries them. He visits Zoya’s grave and vows revenge on Vishnu; he is joined by his friends in this mission.

On the day of Dussera, when Vishnu comes to burn Ravana’s idol, Raghu arrives and starts beating all the goons. Vishnu pierces an arrow into Raghu’s heart but Raghu burns him. While dying, Raghu sees Zoya’s soul and dies peacefully, surrounded by friends and family. The police arrive and the inspector tells the Assistant Commissioner of Police (ACP) that Raghu died. The ACP replies that Raghu returned to his life, which was with Zoya.

Be the first to review “Marjaavaan Dvd” Cancel reply