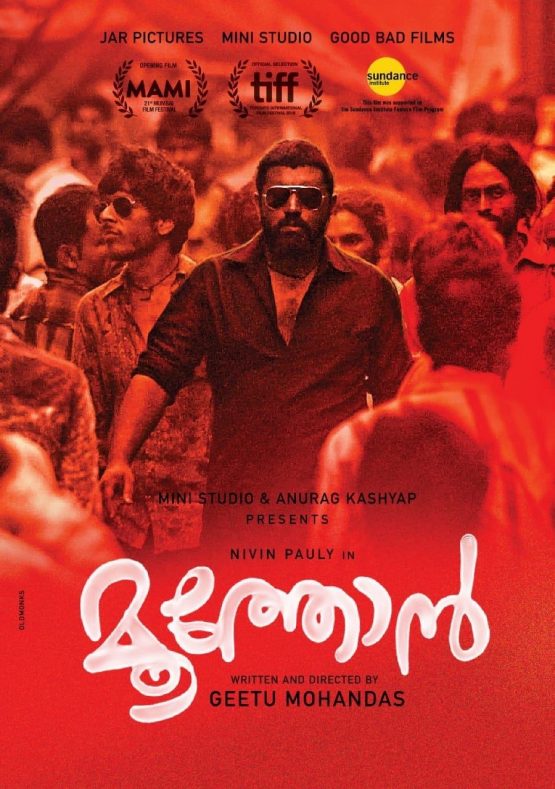 In the dark bylanes of Kamathipura, frequented by prostitutes, child traffickers and drug lords, a young teenager tries to learn the truth about Akbar, a fearless gangster who ran away from love.

The story is about a 14-year-old child, Mulla from Lakshadweep who travels to Mumbai in search of Moothon (elder brother), Akbar who left the island for Mumbai many years ago. Mulla is a child living in Lakshadweep islands under the care of Moosa, a fisherman. He is seen to be wearing baggy clothes and doesn’t go to school due to bullying. The bullies make him wear lipstick and a veil, and he hates girly clothes. He laments his brother who disappeared from the island and tries to search for him. Moosa tells him to drop the issue and to stop imitating his brother’s mannerisms and tells that Mulla can’t become like Moothon by wearing his clothes.

He suspects that Moothon left due to an affair with Aamina (or having been cursed by her) and tries to get her number. Moosa responds that the only Aamina he knows is a fish. However, he manages to get her number. One day, while getting bullied, his friends help him strike back. However, Mulla gets slapped by Moosa for this and he leaves the island by taking a boat under the cover of darkness and proceeds to get hit by a large wave in the ocean, capsizing the boat. He hallucinates a mermaid rescuing him, but in fact, gets rescued by a ship.

The ship authorities send him to a police station and there is a communication barrier as he doesn’t know Hindi. From there, he is sent to a govt-funded orphanage. He is hesitant in taking a bath together with the boys and from there he befriends Raju. The warden tries to rape him, but he manages to escape from him due to Raju’s intervention. Raju tells Mulla about his mother Rosi and where he could find her. Mulla escapes from the orphanage the next day in search of Raju’s mother. Mulla finds Raju’s mother to be a prostitute, who helps him when he mentioned Raju. She provides him shelter and introduces him to a tea seller, who gives him a livelihood selling tea. The neighborhood boys bully him and steal his money, which he had been saving for calling Aamina.

One day, when Mulla was resting on the street after work he gets kidnapped by a local goon known as “Bhai”, a druggie, who is involved in child trafficking and drug dealing. He tries to escape, but is caught by the street boys. Bhai plans on ‘taming’ Mulla for subsequent sale. Bhai’s sidekick, Salim sets up the deal. However, Bhai himself is from the islands and understands Mulla, who says he came looking for his brother. Bhai tells him that he had once killed an islander who tried to survive, but couldn’t and came to Bhai for death. Later, Bhai sets up Mulla to deliver a package (seemingly drugs). However, on seeing a cop, Mulla flees, dropping the package. However, smartphones drop out of the package. Mulla comes back to Bhai’s haunt and tries to steal cash to take his phone. Bhai however, comes back saying thta his sidekick, Salim had warned him not to trust Mulla. Seeing this, Bhai is enraged which makes him slap Mulla. He asks who Mulla was trying to call and Mulla reveals that he is trying to find his Moothon, Akbar and that he is in fact his sister. Bhai is shocked hearing the revelation, and understands that Mulla is in fact his sister, although Bhai does not reveal this to Mulla. Bhai warns Mulla to stay inside until he comes back. One of boys from the street enters the house looking for Mulla while she was bathing and finds out that Mulla is, in fact, a girl and falls in love with her afterwards.

The story backdrops to Bhai’s life in the islands as Akbar. He lives in Lakshwadweep and is a performer of the Muslim ritual Kuthu Ratheeb, along with Moosa. They are professional ritual dancers, and the dance uses daggers to cause self harm, seemingly for healing purposes. During a performance, he makes eye contact with a young man named Ameer, who had just returned from Bombay. It is revealed that Ameer is Aamina’s brother. Aamina’s family is close with Akbar’s as its seen that she helps prepare ointment for Akbar. Ameer is a mute and he had learnt sign language from Bombay, though incidentally, Akbar too knows it apart from his family. Ameer is romantically interested in Akbar, however, Akbar doesn’t return his feelings at first. Ameer invites Akbar to his home when Aamina and her mother had gone for Kochi. However, Akbar is reluctant. Later he confronts Ameer and the two start a relationship. But this upsets Akbar’s relatives and Moosa, who warns Ameer to stay away from Akbar. Ameer tells Akbar that he doesn’t want to get married and Akbar says that he wants to visit Mumbai and see pigeons. Ameer gets married but he wants to leave the island with Akbar and settle in Mumbai. But Akbar refuses to leave with Ameer and he commits suicide.

The film returns to the present with that and Akbar, knowing that his boss is looking for her, approaches their sister Aamina. She is a cabaret dancer working in her husband’s cabaret bar in Mumbai. Akbar asks her to take care of Mulla, but she refuses. So he leaves Mulla to his transgender friend Lateef. The don threatens to kill Akbar and his assistant Salim, if he did not receive the money lost for the dropped package. But Akbar claims a bigger assignment to pay the debt. He is assigned with 20 other thugs to transfer a huge amount of money to a middleman, but fails to do so as he is ambushed by another gang in a vehicle chase, due to backstabbing by a gang member. Mulla runs away from Lateef, who tells her to dress as society wants, and goes back to Bhai’s shelter only to realise that Bhai has been caught by the police.

Salim uses this opportunity to sell the girl as promised. Lateef gets Akbar out of jail and upon release, he beats up Salim asking about Mulla’s whereabouts. Salim takes Akbar to the place where he sold the girl and Akbar is shocked on seeing something (may be Mulla) and gets shot at the same instance (probably arranged by Salim, who is seen comfortably smoking in the car). Later the boy from the street who fell in love with Mulla knocks on the door of a brothel, and Mulla opens the door. He is shocked by seeing her with long hair and girly clothes and smiles. She smiles in return.

Be the first to review “Moothon Dvd” Cancel reply