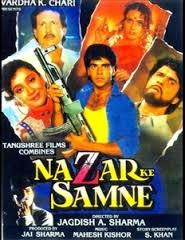 Unemployed and alcoholic wastrel Jai Kumar makes money by indulging in unlawful activities for people who are into shady doings.

Nazar Ke Samne is a 1995 Indian film directed by Jagdish A. Sharma. It stars Akshay Kumar and Farheen Mohammad Rayeesuddin.

Umesh, a photographer is arrested for the murder of his newspaper editor. The fact that they had an altercation earlier and that he was found at the murder scene with the murder weapon (a knife) in his hands lead to his arrest. However, in court the lawyer- Sahni (Kiran Kumar), almost wins the case for Umesh. Enters an eyewitness- Jai (Akshay Kumar), whose statement results in a sentence to be hanged until death for Umesh. Jai Kumar is a fraud who can be paid to become an eyewitness. Sarita- Umesh’s sister comes to know about her brothers predicament and that Jai is a liar. She makes Jai realise how his lies can destroy families. He has a change of heart, falls in love with Sarita and promises to save Umesh. However, the court rejects Sahni’s request to re-open the case. They come across a photograph which was taken accidentally at the murder scene. However, only the murderer’s shoes are seen. Jai tries to find the man who had paid him to lie and to find the owner of the shoes. It turns out that the lawyer is not such a nice man after all. He murdered the editor who was blackmailing him. Now as Jai is trying to find him, he has to make sure there is no proof or witnesses (Badshah Khan Sharbatwala) to prove he is the murderer. Who succeeds and how is the rest of the story.